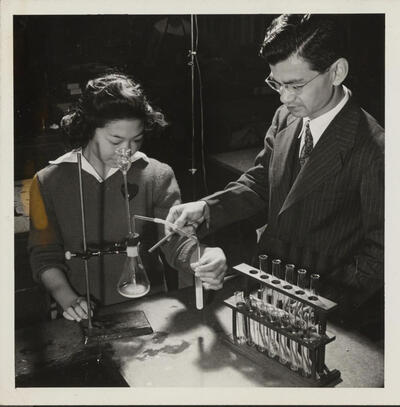 Alum Kaoru Inouye discuss his experience in the Military and his imprisionment during World War II in an American Internment camp.

I obtained my discharge in Japan and became a civilian technical investigator for 5250 Tech Intell Detach, G-2, GHQ, Tokyo, Japan to broaden my intellectual knowledge in the field of chemistry and engineering. During 4 years, I visited most of the 'Imperial' Universities, major industrial firms, and large research laboratories to investigate their war time activities and research projects towards the war efforts. I met many distinguish scientists and researchers and learned many things that gave me a boost in future life.

I was a graduate of University of California, 1938 with a degree in Chemistry and graduate work in micro-chemistry until my leave of absence in 1939. I was drafted into the US Army and accepted by a Navy Board because of my technical background. Half way through basic at Camp Blanding, I was again drafted to MIS to study Japanese. I graduated MIS as S/Sgt, a potential team leader.

At the Heart Mountain Relocation Center, I was called by the Project Director to be informed that some organization on the outside was requesting my assistance. The Project Director could not disclose the source since it was classified and I was already drafted into the US Army.

At basic training, I was called by the Regiment Hdqr and Division Hdqr stating, "that someone was trying to get you out of the Army." The Army was trying get me to be an Officer Candidate for Chemical Warfare or Quartermaster Corp. However, MIS drafted me to study Japanese. 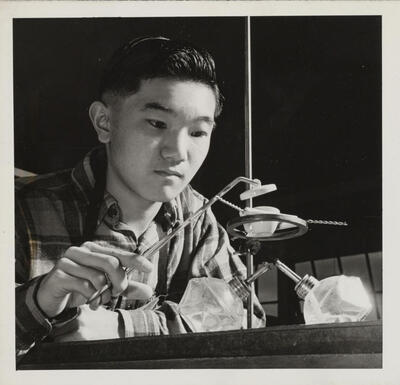 At MIS I was again called in and learned that MIS had a higher priority and could not release me. At X Corp, Kure, I was again called in to be notified that an organization was wanting me but still did not disclose the organization since it was classified. I still wondered who was trying to get me out of the Army. I told them to forget the offer since the war was over and I would be returning to civilian life.

Upon my return to the United States in 1950, I visited my Professor at the Universtiy of California at Berkeley in regards to my future plans. When I walked into his office he said, "Where in the hell were you?" I then realized that his organization at the Manhattan Project was trying to get me out of the Army as the story unfolded. If they had gotten a hold of me, I would not be living today because of radiation poisoning.

This biography is from a posting at the discovernikki.org history project.