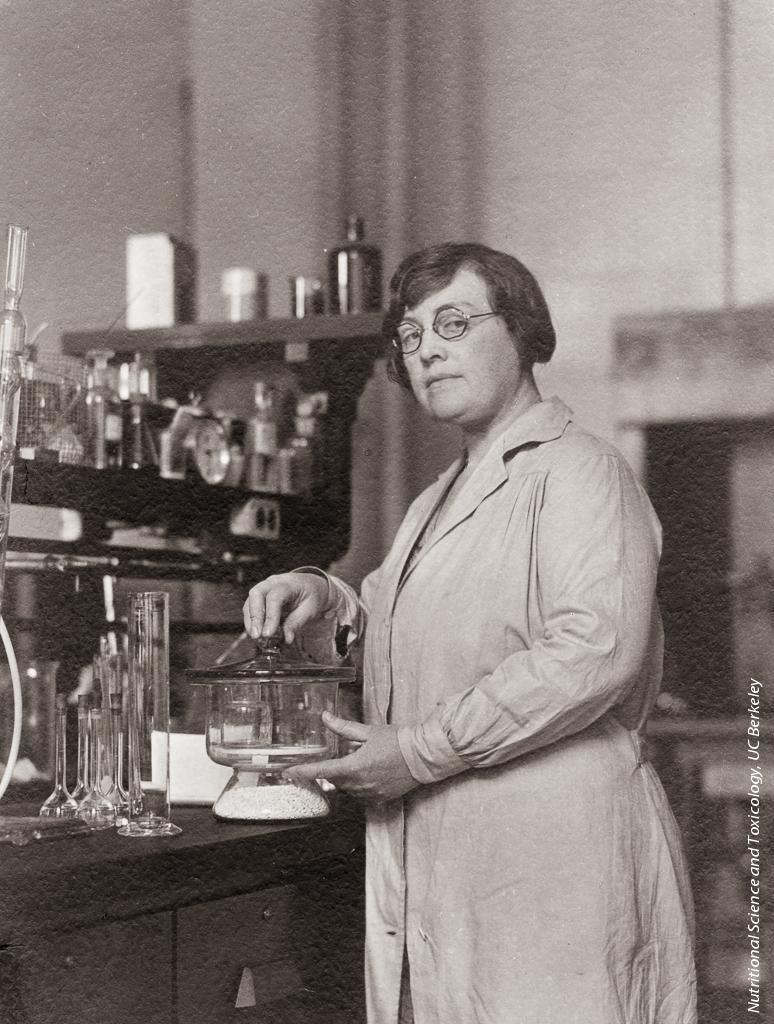 “There were giants in the earth in those days,” and time will endorse the verdict that Agnes Fay Morgan is high on the list of “men (and women) of renown” who have served the University of California long and well.

The Hardin-Simmons Yearbook for 1905 refers to her as “wildly unconventional.” Her marriage in 1908, to Arthur I. Morgan, a senior in her class at the University of Montana, a veteran of the Spanish American War, and a star of the football squad, was probably considered even less orthodox. Fifty years after her arrival at California, at a symposium in her honor, her reminiscences were both colorful and unexpected.

Dr. Morgan came to the University of California as assistant professor in Dr. Jaffe's Division of Nutrition in the College of Agriculture. Because she was convinced that the greatest professional opportunity for a woman trained in chemistry lay in the application of that training to the development of the science of nutrition in a home economics department, she became, in 1916, joint chairman with Mary Patterson of the newly established Department of Home Economics in the College of Letters and Science. In 1918, this department was divided into Household Science, with Agnes Fay Morgan as chairman, and Household Art, with Mary Patterson as chairman. In 1938, Household Science was transferred to the College of Agriculture as Home Economics. Dr. Morgan remained chairman until her retirement in 1954.

Her career as a department chairman was dedicated to the conviction that the function of a university department of home economics was to find out and to teach the “whys” of the things that affect home and family, rather than merely to promulgate rule-of-thumb recipes for “gracious living.” Her realization of the lack of scientific basis for many home customs led to research on such subjects as nutrient content of California foods, the effect of heat on biological value of protein, the toxic effect of high dosages of vitamin D, interaction of adrenal hormones and pantothenic acid, and finally to the work on nutritional status.

Dr. Morgan's teaching was characterized by enthusiasm for her subject, clarity, and a seemingly boundless energy. She had a sublime confidence in her rightness and a genius for disregarding nonessentials and relaxing when the opportunity presented itself. She demanded much of her students, including a background in physical and biological science such as few, if any, other departments of home economics in the country required. Graduates in dietetics were expected to know why therapeutic diets were prescribed as well as how to administer a hospital feeding program efficiently. Candidates for teaching credentials found themselves prepared to teach (and often did teach) basic science courses, rather than the traditional cooking and sewing in high school.

Graduate students were likewise of high caliber. The roll includes not only a dean who developed one of the largest Land-Grant College departments of home economics in the United States and a considerable number of women in university teaching and research, but also a notable number, who, after earning a master's degree, became community leaders in nonprofessional activities. Dr. Morgan's long (and losing) battle to secure one combination secondary certification for teaching foods and nutrition plus high school science and another for teaching clothing, art, and design deserves mention. Equally noteworthy was her personal relationship with her students, to whom she was confidant and friend as well as teacher.

Much of Dr. Morgan's outstanding research predates federal support. She had budget troubles. A $600 grant from the board of research was considered a windfall; until she discovered that chemistry had received $13,000. Her ability not only to see the importance of a problem herself, but also to secure the interest and support of the industry concerned, made possible a number of projects. Examples are her suggestion that since incipient pantothenic acid deficiency led to graying of hair, it might be a factor in the production of the valuable silver fox mutant; her demonstration that sulfuring of fruit during drying preserved vitamin C while it destroyed thiamine; and her studies of nutrients in California wines.

Among Dr. Morgan's off-campus services were membership in the Council of the American Institute of Nutrition at its organization (1934); a survey (with Dr. Helen L. Gillum) of food service at the San Quentin prison (1939); member of the Experiment Station Committee on Organization and Policy of Land-Grant Colleges; the first woman member of the Committee of Nine to administer cooperative research funds of state Agricultural Experiment Stations (1946-1950); chairman (1947), Research Section, Home Economics Division of the Land-Grant College Association; member Governor's Committee on Agricultural Chemiclas (1957-1961). She was chairman of the American Institute of Nutrition committee for the election of Fellows at the time of her death.

Dr. Morgan received a notable number of honors and awards, including the Garvan Medal of the American Chemical Society (1949); Faculty Research Lecturer (first woman), University of California (1950-51); Borden Award, American Institute of Nutrition (shared with Dr. Arthur H. Smith) (1954); LL.D., University of California (1959); Fellow, American Institute of Nutrition (1959); Home Economics Building named Agnes Fay Morgan Hall (1961); and the Phoebe Apperson Hearst Gold Medal from the San Francisco Examiner as one of the ten outstanding Bay Area Women of 1963 (1964). Her fiftieth anniversary at the University of California was celebrated by a symposium on May 8, 1965.

Dr. Morgan's 254 publications include papers on effect of heat on nutritive value of protein; stability of vitamins in processing and storage of foods; metabolic action of B vitamins, ascorbic acid, and carotene; feeding of underweight children; and a textbook on food preparation, as well as 77 professional and review articles. Some 40 of her papers were written after her official retirement.

She came regularly to her office until she had a heart attack two weeks previous to her death, July 20, 1968. Dr. Morgan is survived by her son, Arthur I., Jr., his wife, and two grandchildren. As one of her former staff members commented, “We can only feel that her going marked the end of an era in the education of women.”