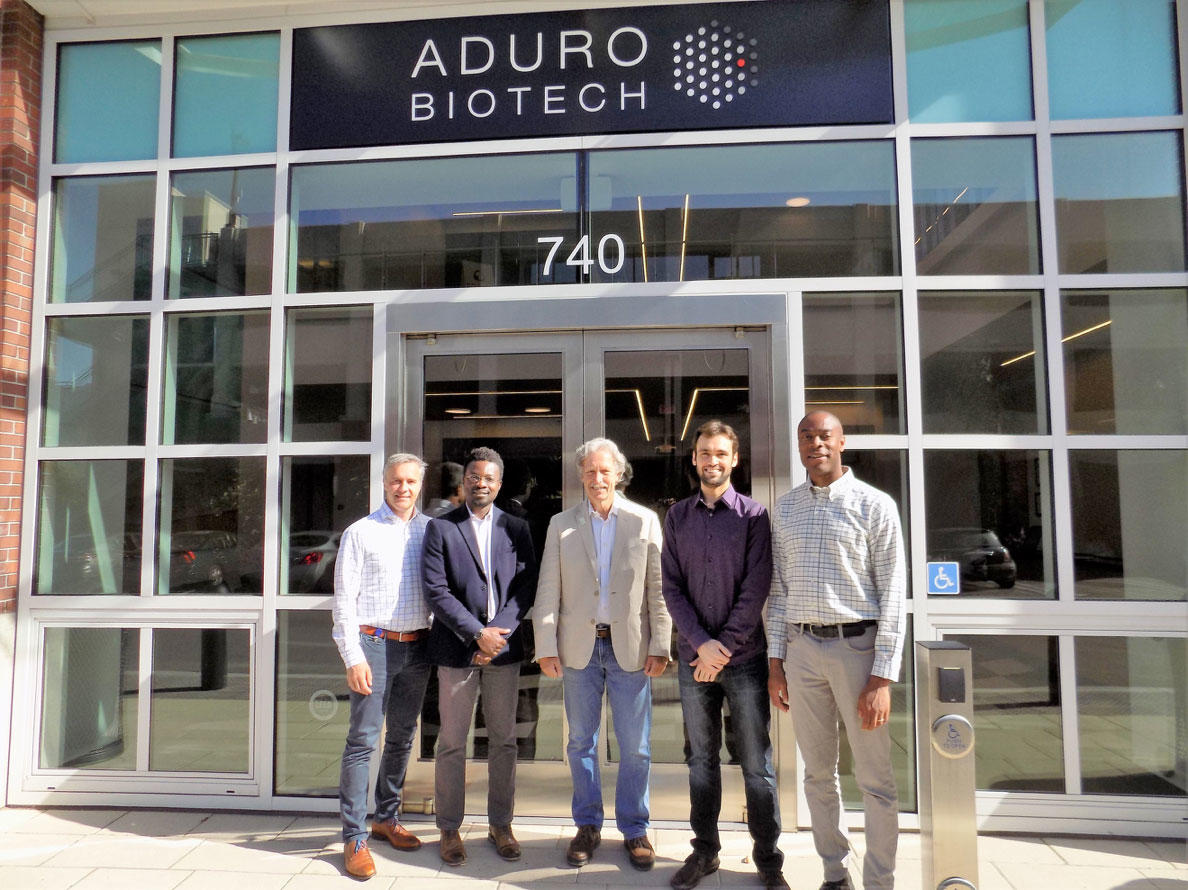 "Imagination is more important than knowledge." Albert Einstein, US Immigrant, 1932.*

Executive Associate Dean and Professor of Chemistry Richmond Sarpong considers diversity to be a window into multiple views of a problem. Sarpong came to school in the United States with a unique point of view. He grew up in Ghana, Zambia and Botswana. His mother was a teacher, and his father was a physician and a public health specialist. As a boy, he became familiar with many diseases prevalent in Africa from AIDS to food related cyanide poisoning. His fascination with chemistry was ignited by an outbreak of River Blindness in the region where he lived in Northern Ghana and the treatment for it with the Merck drug Ivermectin. Ivermectin had started as an animal treatment for heartworm and went on to be used to treat parasites in humans.

Sarpong attended college at Macalester College in St. Paul, Minnesota, where he received his BA in 1995 in Chemistry on a full scholarship.  When he applied to graduate schools, he learned that because he was a foreign national, he did not qualify for American scholarships or fellowships. He was fortunate that he was able to put himself through Princeton University by teaching and being supported by his advisor. He graduated in 2001 with his Ph.D. in organic chemistry. As a postdoc at Caltech, he received a UNCF-Pfizer postdoc fellowship which partially supported his work. However, during both his doctoral and postdoctoral work, he was not truly eligible for any US fellowships.

Sarpong joined the College of Chemistry faculty in 2004 in the area of Organic and Organometallic Chemistry. “Since my arrival at Berkeley, it has been really clear to me that the College attracts the most talented faculty and students,” he states. “But because of lack of available funding, we struggle to acquire a diverse enough group that represents a larger research point of view. So, the question is, how do we play a role as a leading public institution in increasing our diversity?”

He continues, “We can make a difference when hiring new faculty, but only in small numbers. It seemed it was better to focus on our Ph.D. and postdoctoral community to get them ready to move into academia and industry. They are the best place to start because there are more of them so there is the possibility of a significant impact.”

Along with Dean Douglas Clark, Sarpong started looking for a sponsor to create a diversity program specifically for postdoctoral candidates. He met Stephen Isaacs (B.A. Biochem/Chem ’73) at a College event in 2016. Isaacs is the Chairman, President and CEO of Aduro Biotech, a company focused on advancing leading-edge proprietary technologies that are designed to initiate and sustain the immune system to mobilize and attack tumors. The two got to talking and Isaacs expressed that he was also interested in increasing diversity in the sciences. As an outcome of that, and later conversations, in 2018 the Aduro Biotech-UC Berkeley Underrepresented Postdoctoral Fellowship Program was launched.

Isaacs is passionate about diversity. “It has been a long personal road for me getting to this point in my life. When I was in school at Berkeley, the Vietnam War, Civil Rights, and the Black Panthers were huge cultural impacts for all of us students. We were in the middle of it every day,” he comments. “I took away how important diversity and inclusion was and it has continued to be that way throughout my life. For me, the more diverse the people are around you, the richer your experience is.”

Over the past 30-plus years Isaacs has been involved with a half-dozen life sciences companies. He is particularly proud of his work at the Concord blood screening company Cerus Corp. and with Aduro's experimental cancer vaccines. “Aduro Biotech is a very diverse research organization and much richer for its diversity,” Isaacs states. “The idea with this postdoctoral fellowship we have started is to make the effort to recruit the best and the brightest to Berkeley, and then place them in Aduro Biotech’s R&D unit to be mentored with full access to a professional research environment.”

Isaacs has a long personal history of philanthropy. In addition to leading multiple biotechnology companies, he has spent considerable time in Africa working on various non-profit activities. With his daughter and son, he founded A Better Education Club, which provides educational opportunities, microfinance training and healthcare for remote villagers in southern Kenya. More recently, he started the Alliance for Global Health and Science with the Department of Public Health at UC Berkeley, which focuses on strengthening the capacity for scientific and public health research of institutions in developing countries.

“There has been so much serendipity in my life,” Isaacs states. “New doors open every day and you are invited in. I want to give other people that opportunity and help broaden the diversity in the College of Chemistry.”

Sarpong continues, “The program is off to an exciting start. We recruited our first postdoc this year with Dr. Alexander Rovira. Rovira is a first generation Filipino American. His father immigrated to the United States when he was 17. Filipinos are an under represented group in the Ph.D. and postdoctoral populations in the sciences and yet are not eligible for many federal fellowships geared toward under-represented groups, so the Aduro-Berkeley fellowship fills an important gap.” 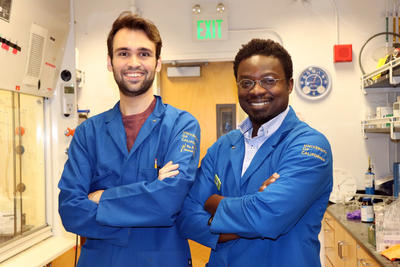 Rovira fell in love with genetics in high school. He took biology and chemistry at UC Santa Cruz where he discovered the joy of making small molecules. “It’s kind of like putting together Legos,” Rovira remarked. He worked in the lab of Bakthan Singaram during his undergraduate years at UC Santa Cruz and went on to UC San Diego for graduate school. He did his Ph.D. work with Yitzhak Tor.

He was very excited about the idea of coming to Berkeley and working with Sarpong on his postdoc. “However, funding was a huge challenge for me,” Rovira explains. “I had applied for a number of fellowships. The general turnaround time is six months to be accepted or rejected. I didn’t know until the last moment that I had received the fellowship. It has allowed me to come and get training with a world-class scientist in a top of the line lab.”

Since his arrival in the Spring of 2018, he has been immersed in organic chemistry. Rovira continues, “As a postdoctoral scholar, my primary goal is to harness my skills in synthetic organic chemistry as the nature of my research (synthesizing natural products) provides many great opportunities to do so. I came to Berkeley to further my development as both a mentor and independent researcher. I am still at the crossroads of deciding between pursuing a career in industry or academia, but will surely be primed to pursue either path after my time here at UC Berkeley.”

Currently Rovira’s research is focused on the syntheses of natural products originally isolated from the sea sponge Sinularia Polydacta (known as the “xishacorenes”) and comprised of xishacorene A, B, and C.

According to Rovira, “These molecules are suggested to arrive from similar, previously studied natural products known as fuscol and the fuscosides (fuscocide A through fuscoside E). We are currently in the process of synthesizing these as compounds with unique strategies such that we can make the xishacorene molecules on a scale much larger than what was previously isolated, as well as be poised to make other molecules that are structurally analogous to xishacorene but inspired by the structurally related fuscol.” Part of their work was recently published in the Journal of the American Chemical Society (J. Am. Chem. Soc. 2018, 140, 9810).

He continues, “I plan to perform studies at Aduro Biotech’s R&D lab to further investigate the bioactivity of each of these molecules after we have completed the syntheses of the compounds in the lab. The hope is that we will not only see their efficacy as potential therapeutics but also gain insights into what the sea sponge may have produced these natural products for.”

Sarpong lights up as he considers the program’s potential. “Thanks to Stephen Isaacs, and Aduro Biotech, we are off to a great start. Our goal is to increase the number of exciting young researchers who will bring diverse points of view into our labs, expand the creation of new chemical science, and then take their ideas out into the world. We hope to spark the involvement of many other companies in this important venture.”

* Einstein is quoted from a 1929 article in the Saturday Evening Post.