We have learned of the deaths of the following members of the College of Chemistry community. Listed below are their names, UC Berkeley degree(s), and information about their academic and work history if known. We have also provided a link to an online obituary when available. 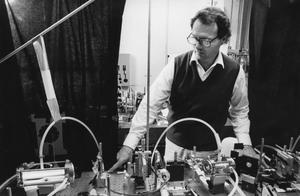 (3/10/20)  Charles was born in New York in 1940 but spent most of his youth in Grosse Pointe, Michigan, a suburb just outside of Detroit. He earned his bachelor's degree from the University of Michigan in 1963 and his Ph.D. degree from MIT in 1966. Charles joined the Berkeley faculty in the Department of Chemistry in 1967. In 2003, Charles became Chair of the Department of Chemistry and then served as Dean of the College of Chemistry from 2004 through 2007. He was also a faculty scientist at the Lawrence Berkeley National Laboratory and served in various administrative roles. Charles retired in 2015 but remained an important part of the chemistry community.

Charles was a world leader in the field of condensed phase chemical dynamics, with a focus on the areas of ultrafast and electron dynamics at interfaces and chemical reaction dynamics in liquids. His prolific career is reflected in over 200 publications and a number of prestigious honors and awards, including membership in the National Academy of Sciences and induction as a Fellow of the American Association for the Advancement of Science, the American Academy of Arts and Sciences, and the American Physical Society.

(05/25/20)  Susan Bergmann Prausnitz was born June 17, 1933, in Berlin, Germany, to Hans and Toni Bergmann, and emigrated with her family to St. Albans in Queens, NY, in 1935. She graduated from Cornell University in 1955 with a major in Zoology, and soon moved to Berkeley, CA, to marry  John Prausnitz, Professor of Chemical and Biomolecural Engineering, and raise a family.

She was a devoted professor’s wife and mother of two. Susie served her community as a paralegal for the nonprofit Legal Assistance for Seniors. She was passionate about swing music, playing ukulele, and gardening. She loved entertaining and was famous for her annual New Years Eve and plum cake parties.

Susie was loved by many for her warmth, wit and charm.  She is survived by husband John, children Stephanie (David Fryer) and Mark (Cindy Weinbaum), and grandchildren Hannah, Mia and Samuel.

Gus D. Dorough (04/13/2020) Ph.D. ’47 Chem. In 1944, Gus was in graduate school at UC Berkeley, majoring in chemistry, when he was drafted into the Army and eventually assigned to work on what would become the Manhattan Project. He was sent to Oak Ridge, Tennessee, and then to Los Alamos, New Mexico. In 1946, he returned to UC Berkeley to complete his doctoral work. Gus graduated in 1947 and went on to teach at Washington University in St. Louis. After seven years he returned to Berkeley to work at the University of California Radiation Laboratory in Livermore, now known as the Lawrence Livermore National Laboratory. In 1971 he accepted a presidential appointment as deputy director of research and technology at the Pentagon. Gus worked at the Pentagon for two years then returned to Lawrence Livermore Laboratory where he worked until he retired in 1985. In retirement, Gus enjoyed traveling, playing tennis and the arts.

Richard Glanville Henninger (1/12/2020) B.S ’43 Chem. Born Council Bluffs, Iowa. Richard moved with his family to California and stayed there to complete his undergraduate education. He attended UC Berkeley where he earned a B.S in chemistry and then went on to Stanford where he earned an MBA. After graduating he served as a Supply Officer, first of the submarine tender USS Clytie during WWII, then of the New London Group of the Atlantic Reserve Fleet and lastly of the USS New Kent based in Norfolk. In 1954 Richard resigned to work as general manager for the Hazleton Laboratories in Vienna, Virginia. In 1972 he became the president of the Karloid Corporation and founded a commercial real estate company. He was a member of the boards of a number of organizations throughout his life.

Robert L. Jamison (1/2/2020) B.S ’51 ChemE. Born San Diego, California. In high school Robert was an ROTC major and joined the navy after graduating. In the Navy he became an electronic technician. After the war, he attended UC Berkeley where he earned a B.S in chemical engineering. Robert began working at Shell Chemical in Torrance, CA and earned his PE to work in industrial chemistry and engineering. Robert went on to work for  Weyerhaeuser in Energy Management until 1985. In reitrement, Robert enjoyed hiking in the great outdoors. He was also a talented woodworker.

Mack Arthur Johansen(link is external) (01/18/2020) B.S ’53 ChemE. Born Salt Lake City, Utah. Mack moved with his family to Oakland California at a young age and remained there through college. Mack attended UC Berkeley where he earned a B.S in chemical engineering. After graduation, he was drafted for the Korean war and was stationed in Karlsruhe Germany. After the work, Mark began working as a chemical engineer helping with the development of chip manufacturing. Throughout his career he worked for several companies including Fairchild, Raytheon, ITT, Schlumberger and AMD. Mark retired in 1996.

James S. Kane (1/21/2020) Ph.D. ’55 Chem. Born in the Bitterroot Valley in rural Montana. James enrolled in the army right after high school graduation and was assigned to the infantry. He was awarded battle stars for campaiagns in the Rhineland and Central Europe. He was also awarded a silver star and combat infantry badge. After the war ended in Europe, he continued to serve during the occupation of Japan and was discharged in 1946. James went on to earn a B.S in chemistry. He worked as a process chemist at General Electric and decided to go back to school once again. James attended U.C Berkeley and earned his Ph.D. in chemistry. He then began working at UCRL, which is now known as the Lawrence Livermore National Laboratory. James became the head of the chemistry and Materials department but then in 1963 moved with his family to Pleasanton. In 1974 he and his family moved again this time to Washington D.C where he directed government research and development organization dedicated to the conservation of energy. James was later appointed deputy director for energy research for the U.S department of Energy. In 1985 he left the government and began working for UC Berkeley as a special assistant to the university president. He retired in 1991.

Thomas Walker Mathewson(link is external) (1/3/2020) B.S. ’50 Chem. Born Santiago, Chile. Before entering university, Tom joined the US Navy and served during WWII. He then attended UC Berkeley where he earned a B.S in chemistry.  After graduation he moved his family in conjunction with his work at Mobil Oil. The family lived in the United States, Japan, and Saudi Arabi. He retired from Mobil Oil and enjoyed spending time with his extended family across the United States.

John L. Shellabarger (02/19/2020) B.S ’58 Chem. Born Oxnard, California. John moved to Los Angeles after graduating high school in search of work. While in L.A., he was recruited by the Naval Reserves. John served in the Korean War and after being discharged hwent back to California. He attended UC Berkeley where he earned a B.S in chemistry. John worked at Applied Magnetics Corporation as a chemist. He was a member of the American Chemical Society for 61 years. He was a life long volunteer.  John had a passion for the outdoors and leading Boy scout troops serving as a scoutmaster.