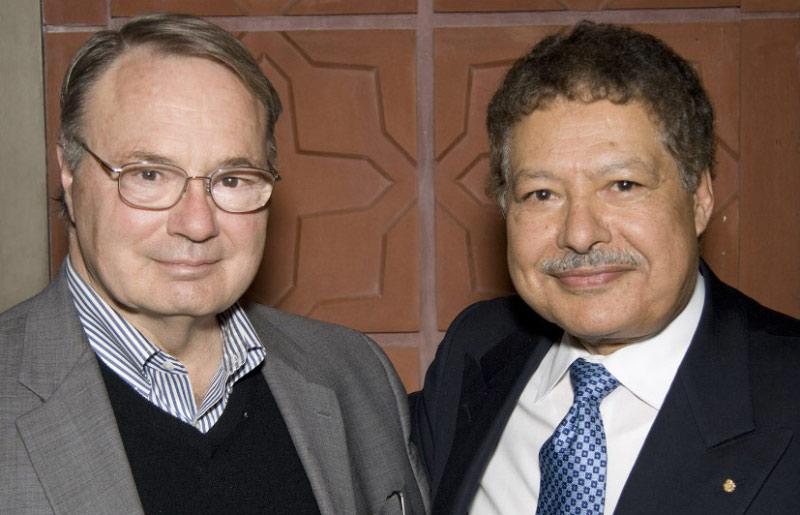 Photo: Chemistry professor Charles Harris with Nobel Laureate Ahmed Zewail, who gave the 2010 G.N. Lewis Lecture. Zewail was a postdoc in the Harris lab from 1974-76.

At the ceremony in Stockholm in December 1999, when Ahmed Zewail was the sole winner of the Nobel Prize for Chemistry that year, Professor Bengt Norden of Chalmers University of Technology, Gothenburgh, a member of the Nobel Committee introduced the recipient with the following words:

“Zewail’s use of the fast laser technique can be likened to Galileo’s use of his telescope, which he directed towards everything that lit up the vault of heaven.  Zewail tried his femtosecond laser on literally everything that moved in the world of molecules.  He turned his telescope towards the frontiers of science.”

To appreciate the magnitude of the advance that Zewail introduced to chemistry, one has to ponder the minuteness of the time intervals that he could routinely employ with his special lasers: a femtosecond is a millionth of a billionth of a second.  It is one second divided by ten to the power of fifteen.  By brilliantly deploying time intervals this small to do ultrafast photography of atom movements of both inorganic and organic molecules in the gas phase, Zewail brought about a revolution in chemistry and adjacent sciences.  He showed how to track the course of the atomic rearrangements that take place in chemical reactions—he could explore the dynamics, in unprecedented detail, of individual atoms involved at the instant of rupture or formation of chemical bonds.

To place this advance, which Zewail achieved in the 1980s and 1990s at the California Institute of Technology (Caltech), into perspective we recall that in the late 1960s, researchers worldwide operated on time scales of micro or nanoseconds.  There are as many nanoseconds in a second as there are seconds in a man’s life.  But a femtosecond is so much smaller: it is to a second as a second is to 32 million years.

Up until the advent of his work, chemists were convinced that it was well-nigh impossible to monitor the atomic movements involved in the so-called transition states when reactants were converted to products.  Zewail changed all that.  He set out to do so as a young Assistant Professor without tenure at Caltech, having first delved deeply into concepts of coherence previously clarified by the Hungarian-American physicist, Eugene Wigner.  From the late 1970s onwards Zewail’s work led inexorably and rectilinearly to his reward in Stockholm.

Being the uniquely gifted experimentalist and versatile theoretician that he was, in 1991 Zewail embarked on another major scientific venture: he designed a new type of electron microscope that, through dexterous use of ultrafast laser pulses and the photoelectric effect, created a stream of ultrafast electrons repeated on a femtosecond scale.  This later enabled him to chart movement of atoms in solids and their surfaces and biological material such as amyloid fibrils a thousand million times as fast as had been done by electron microscopists hitherto.  His so-called 4D electron microscope—three dimensions of space and one of time—is now transforming the whole corpus of physical, biological, medical and engineering science.  Roger Kornberg, a Nobel Laureate for his work in structural biology, in commenting on Zewail’s most recent book, “The 4D Visualization of Matter”, describes it as “a chronicle of an extraordinary journey of invention and discovery”.  Many believed that Zewail was on the course to win a second Nobel Prize.

Born in the town of Damanhur in the Nile delta in 1946, as a teenager he roamed freely that region of his beloved Egypt, and he became, within a few short decades, successor in California to the greatest chemist of the twentieth century, Linus Pauling.  Like Pauling he was destined to shape much of modern science.  He took his initial degree in the University of Alexandria, and also gained a Masters degree there before joining the group of Professor Robin Hochstrasser (formerly of Edinburgh) at the University of Pennsylvania.  After his Ph.D. in Philadelphia, he worked for two years as IBM Fellow in the group of Charles B. Harris at the University of California, Berkeley.  He was then appointed as a junior faculty member at Caltech, where he stayed for the rest of this extraordinary life.

Apart from the Nobel Prize, he was the recipient of numerous other honours, including the Albert Einstein World Award, the Leonardo da Vinci Award, the Robert Welch Award, the King Faisal Prize, the Franklin Prize and the Wolf Prize.  He was an honorary doctor in fifty universities.  Like Madame Curie, Mendeleev, and Faraday he is one of the few scientists to hold honorary doctorates from both Oxford and Cambridge: he became an Honorary Fellow of St. Catherine’s College, Oxford and of Sidney Sussex College, Cambridge.  He was a Foreign Member of the Royal Society and of most other national academies in the world.  He was particularly proud to be a Fellow of the American Philosophical Society, founded by Benjamin Franklin in 1743.  In 2009, President Obama appointed him to the Council of Advisors on Science and Technology and in the same year he became the first U. S. Science Envoy to the Middle East.  In 2013 the Secretary General of the United Nations Ban Ki-moon invited Zewail to join the UN Scientific Advisory Board.

He was profoundly interested in raising the scientific and technological profiles of Egypt and other Middle Eastern countries, and he wrote numerous articles in major newspapers in the U.S., U.K., Egypt, advocating procedures that could be used to help young people and the “have-nots” in the Third World.  For the past several years he took almost daily interest in the establishment of Zewail City of Science and Technology, now in the process of completion on the outskirts of Cairo.  His Advisory Board for that venture has eminent scientists including Sir Magdi Yacoub, O.M., the President of the Chinese Academy of Sciences, and very many Nobel Laureates.  Zewail was decorated with the Order of the Grand Collar of the Nile, Egypt’s highest state honour and was appointed a member of the Legion d’Honneur by the President of France.

For several years, along with the Belgian Nobel Laureate, Christian de Duve, he played a leading role in the UNESCO-L’Oreal Prize For Women in Science.

Author of some 600 papers and 14 books, one of which I co-authored with him, he has left a lasting legacy for generations of future natural philosophers.  As a minor collaborator of his I can testify to two things that made him so unusual as a scientist: first, he combined in a singular manner patience, passion, pertinacity and perspicacity.  Second, he described his work in beautifully elegant and memorable ways: every sentence and every illustration of every paper of his was the product of deep contemplation and lucubration. His unique legacy to natural science is that he made a multitude of wide-ranging, far-reaching, uplifting and long-lasting contributions.

In 1991 he enthralled members of the Royal Institution of Great Britain in Albemarle St., London with his thrilling account of his laser femtochemistry work.  In the course of it he showed a spectacular image of Akhenaton (the father of monotheism, 14th Century BC) and drew attention to “The first known image that depicts that light travels in a straight line”. [See figure below] 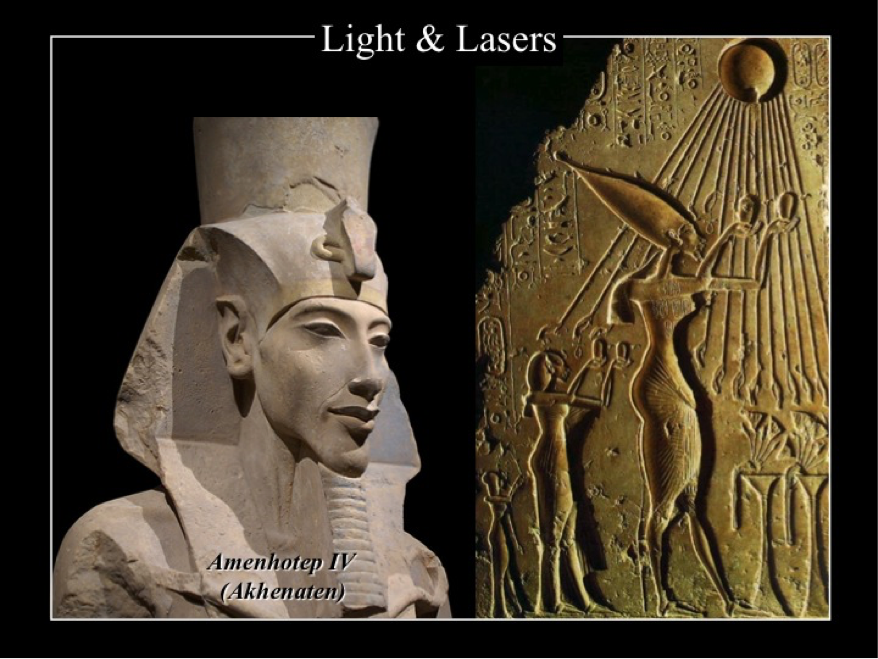 He is survived by his Syrian-American wife, a doctor, Dema, and his four children: Maha, Amani, Nabeel and Hani.

Ahmed Hassan Zewail, the Linus Pauling Professor of Chemistry, Professor of Physics and Director of the Physical Biology Center for Ultrafast Science and Technology at the California Institute of Technology.  Born 26 February 1946 in Egypt, died Pasadena, California 2 August 2016.