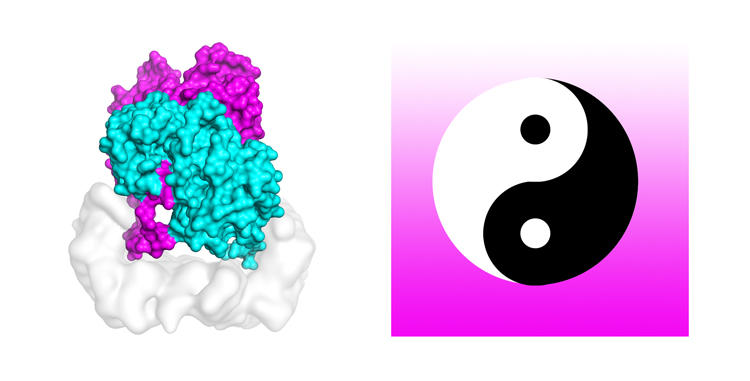 It really does look like Yin and Yang in this B-Raf 14-3-3 complex we solved. image: Yasushi Kondo, UC Berkeley.

Researchers in the UC Berkeley lab of John Kuriyan, Chancellor's Professor at the University of California, Berkeley in the departments of Molecular and Cell Biology and Chemistry, have utilized powerful NSF funded supercomputers at the University of Texas Advanced Computing Center and the Pittsburgh Supercomputing Center to uncover the mechanism that activates cell mutations found in about 50 percent of melanomas. Molecular dynamics simulations on TACC's Stampede2 supercomputer tested the stability of the structure of B-Raf:14-3-3 complex, which when mutated is linked to skin cancer. The study's authors compared the B-Raf dimer to the Chinese yin-yang circular symbol of interconnected opposites joined at the tail. (Credit: Karandur et al.)

In 2002, scientists announced a link between skin cancer and mutations of B-Raf (Rapidly Accelerated Fibrosarcoma) kinase, a protein that's part of the signal chain that starts outside the cell and goes inside to direct cell growth. This signal pathway, called the Ras/Raf/Mek/Erk kinase pathway, is important for cancer research, which seeks to understand out of control cell growth. According to the study, about 50 percent of melanomas have a specific single mutation on B-Raf, known as the valine 600 residue to glutamate (V600E).

B-Raf V600E thus became an important drug target, and specific inhibitors of the mutant were developed in the following years. The drugs inhibited the mutant, but something strange happened. Paradoxically, quieting the mutant had a down side. It activated the un-mutated, wild-type B-Raf protein kinases, which again triggered melanoma.

"With this background, we worked on studying the structure of this important protein, B-Raf," said Yasushi Kondo, a postdoctoral researcher in the Kuriyan Lab. Kondo is the co-author of an October 2019 study in the journal Science that determined the structure of the complex of proteins that make up B-Raf and also found how the paradoxical B-Raf activation happens.