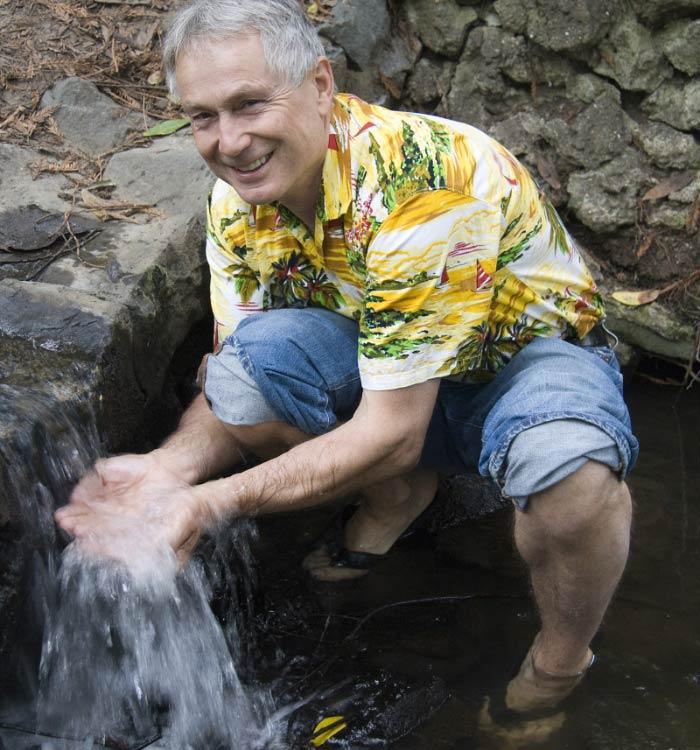 For a simple compound that is central to almost every aspect of our existence, water remains fiendishly difficult to understand. No one appreciates this better than chemistry professor Rich Saykally, who has devoted many years to studying water.

Even a minute sample contains far too many atoms and bonds to study, so Saykally has explored water from the bottom up, first by creating clusters of just two molecules and working up to larger and larger clusters.

In an article in the June 3 issue of Science magazine, Saykally and co-workers characterize the water octamer, a cluster of eight water molecules in a roughly cubic form. Says Saykally, “Understanding the octamer is important because it represents a transition to structures formed by stacking quasi-planar rings, a dominant pattern in larger systems. The water octamer has become an important benchmark.”

A huge effort has been devoted towards the development of computer models for water that can correctly describe its structure and physical properties, thermodynamics, phase behavior, solvation properties, and ultimately, its chemistry.

“That we still do not have such a robust computational approach for water, let alone for aqueous solutions and aqueous interfaces, is a great impediment to science,” Saykally notes.

While isolated clusters do not exist as such in bulk water, highly detailed spectroscopic study provides accurate benchmarks for characterization of the complicated many-body forces that operate in bulk-water phases.

In the Science paper, the Saykally lab has presented the first high-resolution spectroscopic study of the water octamer. Terahertz vibration-rotation-tunneling (VRT) spectroscopy was used for the measurements. This work complements recent and elegant microwave spectroscopy characterization of the water heptamer and nonamer, also published in Science. The octamer could not be detected by that method because it lacks a dipole moment.

Nearly 100 individual measurements were made with parts-per-million accuracy and fitted to a standard model, which characterizes the structures and vibrational distortions of the cluster. Two distinct cuboidal structures were characterized via measurement of their torsional vibrations.  The results are in good agreement with recent theoretical predictions of the hydrogen-bond rearrangement tunneling rates and octamer cluster structures. 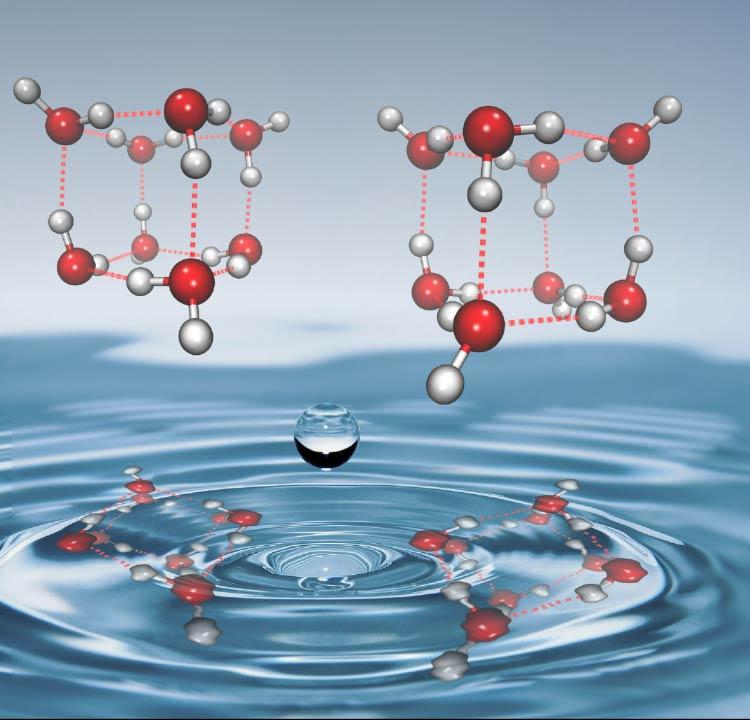 Graphic: The two cuboidal structures of the water octamer characterized by infrared and terahertz laser spectroscopy and theory. These cuboids are formed by stacking of two four-membered rings with the circular direction of the hydrogen bonds in the same (left) and opposite (right). Larger clusters form via a similar stacking of larger quasiplanar rings.

Considerable progress has been realized over the last several years by the Saykally group and their collaborators in the long-sought quest for a universal first-principles model of water. This goal has been aided by the development of several new potential energy surfaces, including new spectroscopically refined surfaces.

“Our approach is to help develop, test, and refine potential energy surfaces via our VRT spectroscopy results for water clusters, in combination with state-of-the-art theoretical calculations,” says Saykally.

It is important to continue these efforts in order to realize the ambitious but crucial goal of producing a water model that is relatively simple, yet capable of accurately reproducing and predicting observable properties of water in all of its forms (including the liquid-vapor interface) over large ranges of conditions. That is the goal that Saykally continues to pursue.