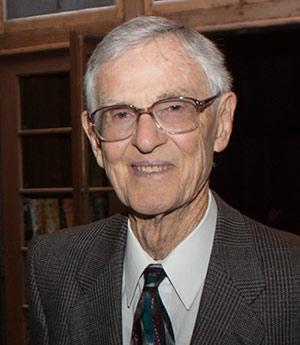 Professor Robert E. Connick, esteemed professor emeritus of chemistry and alumnus of the College, has died at the age of 97. He passed away peacefully at his home in Kensington, CA, on Thursday, August 21.

Bob Connick was born in Eureka, CA, on July 29, 1917. He moved with his family to the city of Berkeley when he was 12 years old. After attending Berkeley High, he enrolled at UC Berkeley and earned both a B.S. (’39) and a Ph.D. (’42) in the College of Chemistry, with William Bray as his research director.

Hired at Berkeley as an instructor in 1943, he immediately joined the Manhattan Project, studying the chemistry of plutonium and devising separation techniques. Through the decades, his areas of research included NMR, reaction kinetics, ligand exchange reactions, hydrolytic oligomerization, ruthenium chemistry, sulfur chemistry and computer modeling of exchange reactions.

Bob Connick became a full professor in 1952, the same year that he married Frances Spieth, a Ph.D. alumna of the College of Chemistry, who had earned her doctorate in chemistry in 1947 working with Axel Olson. Frances, who died in 2009 at the age of 86, taught chemistry at City College of San Francisco from 1968 until her retirement.

In 1974, Connick became a principal investigator at the Lawrence Berkeley National Laboratory. He retired from UC Berkeley and LBNL in 1988.

Connick was notably generous in his administrative service to the College and the University. He served not only as chair of the Department of Chemistry (1958-60) and dean of the College (1960-65), but also as a Berkeley vice chancellor (1965-71) and chair of the Academic Senate of both Berkeley (1972) and the UC system (1982-83). In recognition of his exemplary achievement and service, he received the Berkeley Citation in 1971 and the Berkeley Medal — the university’s top honor — in 1988.

Over the course of his career, he touched many lives. One of his students, James Y.P. Tong (B.S. ’50, M.S. ’51, Chem), recently established an undergraduate scholarship fund in Connick’s name in tribute to Connick’s mentorship.

We have learned from his family that it was Bob’s wish not to have a memorial service.

Professor Connick will be greatly missed.