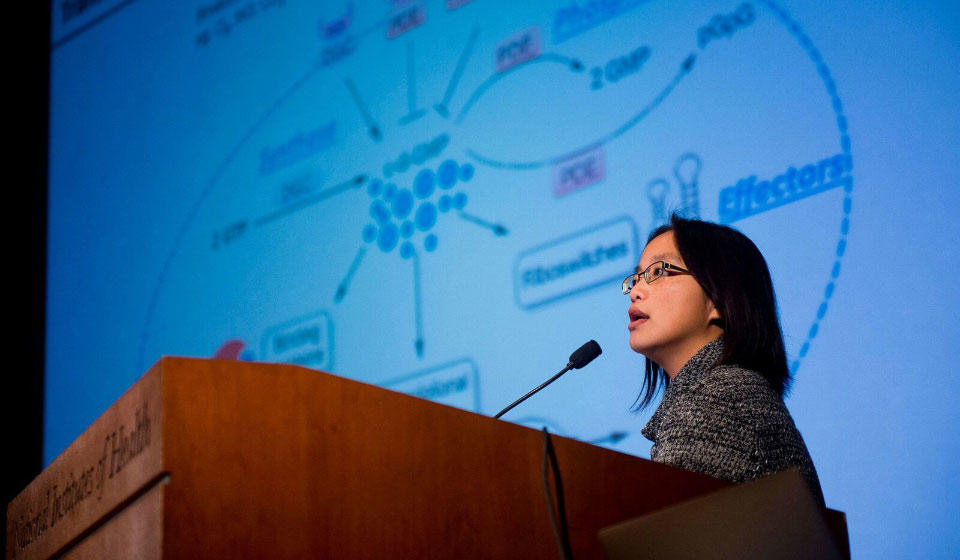 Bacteria are like gunslingers in old Western movies. As long as they are just riding through town, things are OK. But when they gather at the local saloon, bad things can start to happen.

How do bacteria decide when to stick around, and what can we do about it? Chemistry professor Ming Hammond is working to answer these questions. She and her co-workers just published an article exploring this topic in the Proceedings of the National Academy of Sciences. Their results may eventually lead to new approaches for controlling bacteria, with wide-ranging implications from disease prevention to environmental cleanup.

“Take cholera as an example,” says Hammond. “It is caused by virulent strains of the bacterium Vibrio cholerae, which live in brackish water. If consumed, they can colonize the intestines of humans and other mammals, where they produce a toxin that causes severe and sometimes fatal diarrhea in people, especially children.”

Hammond adds, “My group has been studying a bacterial-signaling molecule called cAG, which is shorthand for cyclic AMP-GMP. It was first identified in the strain that caused the 2010 cholera epidemic in Haiti, and it regulates the ability of cholera to colonize the gut.

“We’ve discovered that other bacteria also use cAG as a signaling molecule, and our study makes some unexpected connections between how different bacteria sense and respond to contact with certain surfaces, whether it’s in a host, among other bacteria or even on a rock.”

The cAG signaling molecule is known as a second messenger. The idea of second messengers was developed by Earl Sutherland, who won the 1971 Nobel Prize in Physiology or Medicine for his research on hormone signaling.

Cells are exposed to thousands of different environmental stimuli — anything from temperature and light to oxygen and hormones. These primary signals, however, can’t usually cross the cell membrane. Instead, they are transmitted through second messengers inside the cell, which then dictate how the cell responds to these environmental conditions. In the case of cholera, cAG production has been tied to intestinal colonization, but its specific primary triggers and subsequent pathways are still unknown.

While developing new tools to detect cAG, the Hammond lab discovered a natural riboswitch sensor for cAG, a finding that was highlighted as one of the 2015 Signaling Breakthroughs of the Year by Science Signaling.

Instead, the Geobacter DNA encodes numerous GGDEF enzymes, a class of enzymes known for their ability to create the related messenger molecule cdiG. “One possibility we considered is that a GGDEF enzyme had gained the ability to produce cAG.” Hammond says. “But that goes against the established dogma in the field, which, for the past 30 years, has firmly stated that GGDEFs solely produce cdiG.”

Hammond lab members Zach Hallberg and Cindy Wang tested all 29 of the GGDEF enzymes of Geobacter sulfurreducens for their ability to produce cdiG or cAG. To track production, they used their homemade fluorescent sensors, the ones whose development led them to discover cAG signaling in Geobacter. While most of the GGDEF enzymes lit up the cdiG sensor, one of them instead triggered the cAG sensor. Hallberg and Wang named this new class of GGDEF enzymes Hypr GGDEFs, or Hybrid promiscuous GGDEFs.

(A) The hybrid cyclic di-nucleotide signal molecule, cyclic AMP-GMP (cAG), is produced by many different bacteria when they grow on surfaces. (B) One species of bacteria that uses cAG is Myxococcus xanthus, which exhibits “social” behavior by moving and hunting for food in swarms of many cells.

The Hammond group next cast their net broadly and found Hypr GGDEFs in other groups of bacteria. Working with their collaborator, Beiyan Nan of Texas A&M, they showed that Myxococcus xanthus, a swarming bacterium that can produce many types of antibiotics, makes more cAG when grown on a solid surface than when suspended in liquid broth. “The common thread for the role of cAG in diverse bacteria appears to be surface-related,” speculates Hammond, “but we’re still connecting the dots. We’re especially curious about what the first messengers are.”

“It’s exciting to see how tool development and serendipity can synergize hypothesis-driven research,” says Hallberg, lead author on the study. “The biosensors that Cindy and my other lab mates have developed are the real stars of the show. Our discovery of Hypr GGDEFS is proof by example of how we can rapidly discover new enzyme activities.”

“While my lab conducts fundamental research,” adds Hammond, “understanding how Geobacter decide when to produce electricity may allow other researchers to more easily engineer microbes for use in fuel cells and in the bioremediation of waste compounds like uranium and petroleum byproducts. We continue to seek out collaborations to leverage our biosensor technology for developing new therapeutic approaches to fighting cholera and other diseases.”

In an era when many antibiotics are losing their effectiveness against bacteria, alternative ways of dealing with them are in high demand. If bacteria are like lone gunslingers in old Western movies, you might not need to have a gunfight. Hammond’s research could help to create chemical smoke screens or mirages to keep bad bacteria at bay, or to enlist good bacteria as allies.

“By understanding how bacteria make decisions, we may be able to trick them into doing what we want,” concludes Hammond.

This research was funded by Hammond’s 2011 NIH New Innovator Award and was presented at the NIH High Risk/High Rewards Research Symposium on Dec. 7, 2015.

When scientists fight to save the climate
END_OF_DOCUMENT_TOKEN_TO_BE_REPLACED