Gabor Somorjai, University Professor and Berkeley professor of chemistry, has been awarded the 2013 National Academy of Sciences Award in Chemical Sciences.

The award honors innovative research in the chemical sciences that contribute to a better understanding of the natural sciences and to the benefit of humanity. Somorjai, who is also a Faculty Senior Scientist at the Lawrence Berkeley National Laboratory, is being honored for his groundbreaking experimental and conceptual contributions to the understanding of surface chemistry and catalysis at a microscopic and molecular level.

The National Academy of Sciences is a private, nonprofit institution that was established under a congressional charter signed by President Abraham Lincoln in 1863. It provides science, technology and health policy advice to the federal government and other organizations.

Somorjai is one of 18 individuals honored by the Academy in recognition of their outstanding scientific achievements in a wide range of fields spanning the physical, biological, and social sciences. The recipients will be honored in a ceremony on Sunday, April 28, during the Academy's 150th annual meeting.

Somorjai has been the recipient of numerous awards, including the Wolf Prize in chemistry (1998), the National Medal of Science (2002) and the Priestley Medal (2008), the highest honor of the American Chemical Society. Recently he received two prestigious European awards, the BBVA Foundation Frontiers of Knowledge Award in Basic Sciences (2011) and the ENI New Frontiers of Hydrocarbons Prize (2011).

The recipient of so many awards, Somorjai has turned his attention to bestowing them, as well. Grateful for the opportunities UC Berkeley has given him, he has created a special visiting professorship program through the campus’s prestigious Miller Institute for Basic Research in Science. The institute is dedicated to the encouragement of creative research and investigation in the pure and applied sciences.

Along with his spouse, Judith, Somorjai has created the Gabor A. and Judith K. Somorjai Visiting Miller Professorship Award. The Somorjai's gift will support early-career visiting scientists for one-month terms at the Miller Institute.

The Miller Institute was established in 1955 with a $5 million trust from the family of Adolph C. Miller. He was born in San Francisco in 1866. A UC graduate, Miller was the first head of the university’s Department of Economics. For 22 years he served as a member of the Federal Reserve Board.

The Somorjais also contribute generously to the Gabor and Judith Somorjai Graduate Student Support Fund in the College of Chemistry. 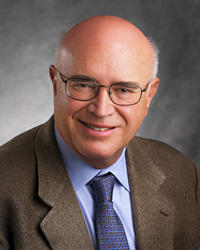