Emeritus Professor of Chemistry Herbert “Herb” Leopold Strauss died at home in Berkeley on December 2, after a long illness. He was 78.

Strauss was an internationally recognized spectroscopist who studied the rotational and vibrational properties of molecules. Although he officially retired in 2003, he remained active on campus as a professor of the graduate school. He taught his last class, a graduate seminar, three weeks before his death.

Strauss was born in 1936 in Aachen, Germany, to Joan and Charles Strauss. With the help of relatives in England, the family, including Strauss’s younger brother, Walter, escaped Nazi Germany for England in 1939. After a harrowing year in London, during which Strauss almost died from bronchitis, the family was able to immigrate to the United States.

The family lived in a small apartment in Kew Gardens, Queens, New York. Strauss’s father worked as a real estate agent, and his mother as a saleswoman in a clothing store. Although not wealthy, the family was a loving and supportive one that placed great emphasis on education.

Strauss studied chemistry as an undergraduate and then as a graduate student at Columbia University in New York City. In 1957 he met his future wife, Carolyn North Cooper, on a blind date at the Christmas Eve midnight mass of a Manhattan church. Both Herb and Carolyn were Jewish, so meeting at a church was an irony that they both enjoyed. They were married about the time Strauss finished his Ph.D. in 1960 with George Frankel, and the newlyweds spent a happy year in Oxford as Herb carried out postdoctoral studies there.

Strauss joined the Berkeley chemistry faculty in 1961, where he spent his entire professional career. Using Fourier transform infrared spectroscopy, he explored properties of a variety of molecules, especially n-alkanes with lengths of 5 to 40 carbon atoms. He also used Raman and neutron spectroscopy to study the rotations and vibrations of molecular hydrogen embedded in various systems, including ice and zeolites.

He received the Bomem-Michelson Prize for Spectroscopy in 1994. He also received the Lippincott Award for Vibrational Spectroscopy the same year for three decades of elucidating the complex dynamics of large molecules in condensed phases.

Strauss made exceptional contributions to the College of Chemistry. He served as Associate Dean of Undergraduate Affairs from 1995 through 2008. During his tenure as associate dean, he was instrumental in increasing minority participation in the sciences, was very active in improving gateway courses in chemistry, mathematics and physics, and served as the campus coordinator for the Chevron Undergraduate Research Program for minority students.

Strauss served on many campus and university committees and received the Berkeley Citation in 2003 for his distinguished and extraordinary service to the University, as well as the Berkeley Academic Senate’s Berkeley Faculty Service Award.

In his nomination letter for Strauss’s Berkeley Citation, then College of Chemistry Dean Clayton Heathcock wrote, “In the more than four decades that Strauss has spent here at Berkeley, he has shown an outstanding dedication not only to his research and the scientific community in general, but also to ensuring that each member of the student body receives the most rewarding and fulfilling education that they possibly can. It is with the greatest respect that I submit this nomination letter on his behalf.”

Herb and Carolyn lived in Berkeley for most of their 58 years together, where they raised their three children, Michael, Rebecca and Ethan. They lived just a short bicycle ride from the campus, and Herb could be seen pedaling up Telegraph Avenue every morning and evening. He was an avid cyclist, often riding 100-mile routes on weekends. He was a devoted husband, father and grandfather.

He is survived by his wife, Carolyn North; his brother and sister-in-law, Walter and Phyllis Strauss of Newton, MA; his children and their spouses, Michael and Sofia Strauss of Princeton, NJ, Rebecca Strauss and Susan Wilson of Waltham, MA, and Ethan and Anne Strauss of Madison, WI; and four grandchildren, Alexandro, Camilla, Robert and Elizabeth Strauss.

A memorial will be planned for the spring, near the time of Strauss’s birthday.

Contributions in his memory can be made to The Berkeley Center for Green Chemistry (please make checks payable to UC Berkeley Foundation), University of California, Hildebrand Hall 237A, Berkeley, CA 94720, or The Green Science Policy Institute , P.O. Box 5455, Berkeley, CA 94705. 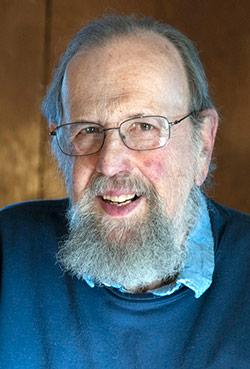