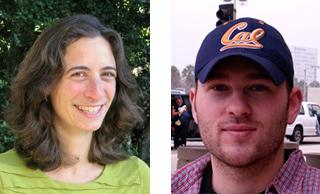 Chemistry professors Naomi Ginsberg and Thomas Maimone are winners of 2015 Sloan Research Fellowships, awarded by the Alfred P. Sloan Foundation. They join the ranks of 126 early-career scholars in several scientific disciplines from Canada and the United States who have been selected.

“The beginning of one's career is a crucial time in the life of a scientist. Building a lab, attracting funding in an increasingly competitive environment and securing tenure all depend on doing innovative, original, high-quality work and having that work recognized,” says Paul L. Joskow, president of the foundation.

Alfred P. Sloan was elected Chairman of the Board of General Motors in 1937. When he resigned from the chairmanship in 1956, he was then named Honorary Chairman of the Board, a title he retained until his death in 1966. During the later years of his life, he devoted the largest share of his time and energy to philanthropic activities, both as a private donor to many causes and organizations and through the Alfred P. Sloan Foundation, which he established in 1934.