Douglas Clark, dean of the College of Chemistry and the Gilbert Newton Lewis Professor, has helped develop a new type of biochip that emulates the three-dimensional structure and the metabolism of a human liver. The device could one day eliminate the need to harvest and use liver cells from human cadavers to test the toxicity of potential new drugs and drug candidates.

The new biochip technology is the result of collaboration between researchers from Berkeley, Rensselaer Polytechnic Institute, Samsung Electro-Mechanics and Solidus Biosciences. The team’s research findings were published this week in the journal Nature Communications.

Clark and Jonathan Dordick, vice president for research and the Howard P. Isermann Professor at Rensselaer, are co-founders of Solidus Biosciences, which collaborated with Samsung to develop the new liver toxicity test.

Pharmaceutical toxicity testing is usually conducted using human hepatocytes, a type of liver cell involved in metabolism. However, these cells can be difficult to work with. The research team’s new biochip, called the Transfected Enzyme and Metabolism Chip, or TeamChip, addresses the widely known challenges of using hepatocytes for liver toxicity testing.

“Drug discovery is a highly competitive enterprise that requires significant up-front investment and suffers a low success rate,” said Clark. “A high-throughput alternative to using human hepatocytes would speed up the testing process and reduce costs, while alleviating the problems related to sourcing the cells from cadavers. The new TeamChip technology is a highly flexible platform that addresses these challenges directly.”

Each TeamChip features 532 individual liver-cell assays. Each sample is extremely small, with a volume of only 60 nanoliters. The liver cells are “printed” onto the chip and form gelatinous 3-D structures that mimic the structure of human liver.

The TeamChip is smaller than a microscope slide and can be rapidly assembled.
Photo credit: Rensselaer Polytechnic Institute.

Once all of the samples have been printed, the drug candidate is added to the TeamChip, which is incubated for up to three days. Afterward it is removed from incubation and then analyzed for cell viability. Cells that generate drug candidate metabolites that are toxic result in lower cell viability, which can be visualized with staining techniques.

“This technology represents the next level of our previously developed 2-D biochip platform,” Clark said. “It enables very effective and efficient use of 3-D cell cultures in a high-throughput microarray system. It also gives us a simple and reproducible approach to look for the liver toxicity of a particular compound.”

This research project was funded with support from the National Institute of Environmental Health Sciences and partial support from Samsung Electro-Mechanics. 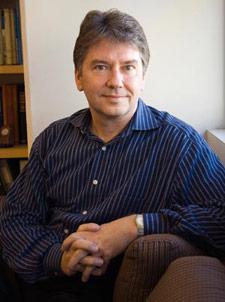 Douglas Clark, dean of the College of Chemistry and the Gilbert Newton Lewis Professor.