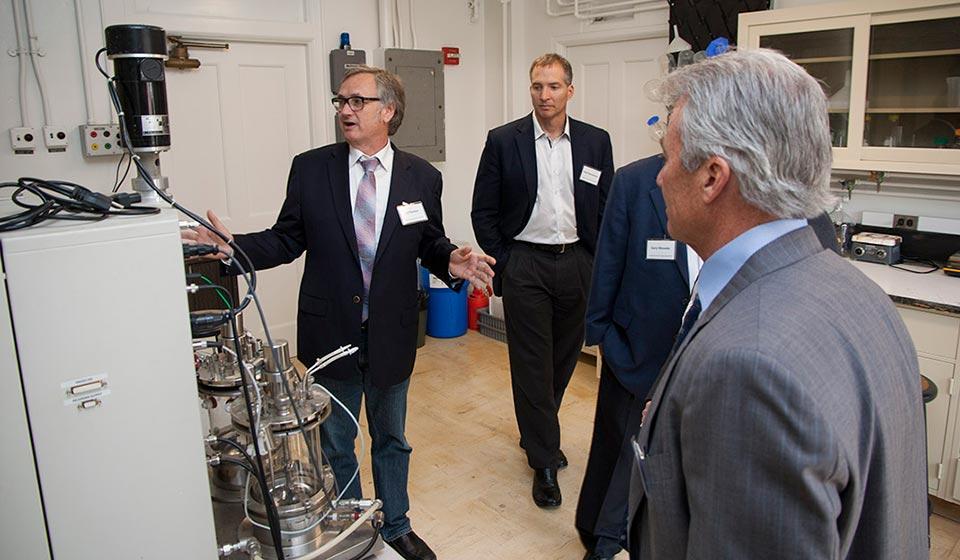 The Department of Chemical and Biomolecular Engineering’s innovation incubator lab is open for business. The lab has been created to give student-led projects a formal home in the department.

The lab occupies a special space, the historic room 307 of Gilman Hall, where Nobel Laureate Glenn Seaborg verified the creation of a new element, plutonium, in 1941.

According to CBE’s Director of Undergraduate Education, Shannon Ciston, “CBE chair Jeff Reimer first proposed the idea last fall. He suggested creating a space for students who were ready to do their own hands-on projects.”

The incubator came together quickly. Room 307 was remodeled, two modern fermenters and other equipment were installed, and the lab was easily ready in time to be toured by the college’s Advisory Board on March 16. Board member Chat Chatterjee (Ph.D, ’71, ChemE) has provided a generous donation to support the lab, and his spouse, Ellen, has created a chemistry-themed quilt as the incubator’s first artwork.

Four projects, proposed by different groups of students, have been approved:  1) fermentation techniques for beer production, 2) biofuels, 3) emulsifiers based on okara, a waste product from tofu making, and 4) fuel cells.

Third-year CBE student Jun Auh, from Seoul, Korea, is a member of the group studying emulsifiers. Says Auh, “We have been discussing our project with Tofu Yu, a local tofu maker. Okara, the liquid left over from tofu making, is discarded. We think it has potential to yield emulsifiers for food, cosmetics and pharmaceutical applications. It also contains protein, so it could be used as a nutritional additive.”

Adds Ciston, “The incubator is quiet right now, but with the fermentation and emulsifier projects underway, by April it should be hopping.”