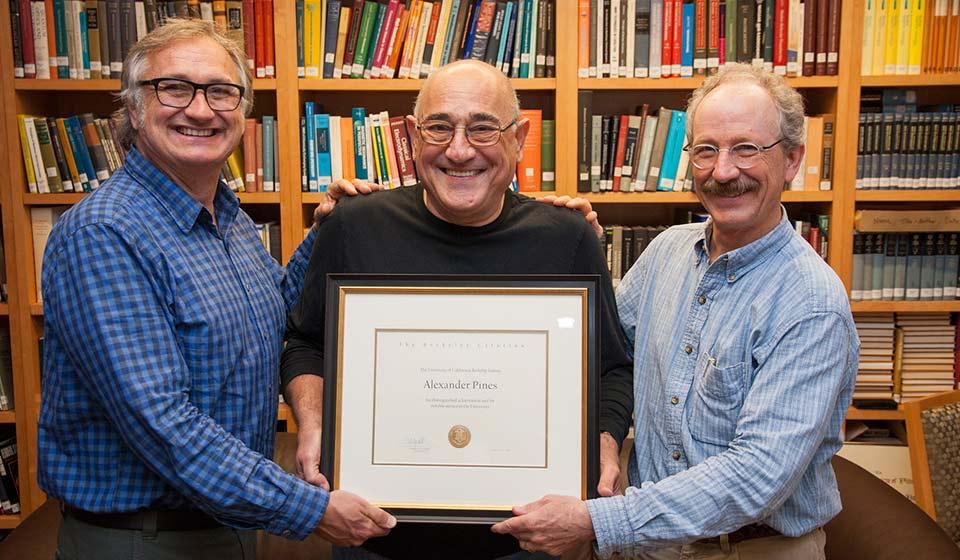 Chemistry professor Alex Pines has been awarded the Berkeley Citation. It was presented to Pines in April at a celebration of his 70th birthday, held during the 56th ENC Experimental Nuclear Magnetic Resonance Conference at the Asilomar Conference Center in Monterey, CA.

The Berkeley Citation was created to allow Berkeley to honor members or friends — whether individuals or organizations — that render distinguished or extraordinary service to the university. The citation may be awarded to a wide range of people or organizations, academic or nonacademic, whose attainments significantly exceed the standards of excellence in their fields and whose contributions to UC Berkeley are manifestly above and beyond the call of duty.

Pines is a pioneer in the development and applications of nuclear magnetic resonance (NMR) spectroscopy, originally in solid-state NMR. The 1973 paper, "Proton enhanced NMR of dilute spins in solids," has been cited more than 2000 times. Techniques he has developed have had a substantial impact in chemistry, materials science and biomedicine and have been widely adopted to investigate molecular structure and organization.

Pines joined the College of Chemistry faculty in 1972 and has been at Berkeley since then. He was born in 1945 in Tel Aviv and grew up in Rhodesia (now Zimbabwe) where his lifelong passion for science, music and chess was fostered. He studied mathematics and chemistry at the Hebrew University of Jerusalem, graduating with a B.Sc. in 1967. Pines then moved to MIT, where he obtained his Ph.D. in chemical physics in 1972, a few months before he joined the Berkeley faculty.

At Berkeley, Pines introduced many new techniques including multiple-quantum spectroscopy and methods that combine optical pumping and cross-polarization to observe the selective "lighting up" of surface and solution NMR and magnetic resonance imaging (MRI) by means of laser-polarized xenon.

He is currently engaged in the development of novel spin polarization methods, targeted NMR sensors for molecular imaging, ultralow and zero-field NMR and MRI, detection of magnetic resonance amplified by means of laser magnetometers, and miniaturization of NMR, including its combination with microfluidic ("lab on a chip") technologies.

Pines has received the Langmuir Medal of the American Chemical Society and the Faraday Medal of the Royal Society of Chemistry. He is a member of the U.S. National Academy of Sciences and a Foreign Member of the Royal Society (London) and the Indian Academy of Sciences. He is past president of the International Society of Magnetic Resonance. In 1991 he was awarded the Wolf Prize for Chemistry (together with Richard R. Ernst).

An educator and mentor of undergraduate and Ph.D. students as well as postdoctoral fellows, Pines has been awarded numerous teaching honors, including the University of California's Distinguished Teaching Award and the Robert Foster Cherry Great Teacher Award at Baylor University.

Berkeley chemistry department chair David Wemmer was one of Pines's first graduate students. Says Wemmer, "From the very beginning it was clear that Alex has an extraordinary depth of insight and creativity in science that is extremely rare. His work has had tremendous impact in the field of magnetic resonance. Many of the major innovations that have increased the impact of NMR, one of the most broadly applied tools in chemistry research, have come from his laboratory."

CBE chair Jeff Reimer, who has worked with Pines on many NMR projects, says, "Alex Pines is a mensch at all times to his group members and never turns his time or attention away from those seeking his input. He was mentoring and enabling female doctoral students at times when their numbers in the physical chemistry program were very small. Never withholding his presence, he nevertheless does not tell his group members what to do or how to do it. In this way he fosters a laboratory that emphasizes intellectual courage, independent thinking, and esprit de corps."

Over two hundred self-dubbed "Pinenuts" have passed through his laboratory, graduating to research, teaching and other creative activities worldwide. Many of them can be seen in the photos and on the videos created for his 70th birthday celebrations:

When scientists fight to save the climate
END_OF_DOCUMENT_TOKEN_TO_BE_REPLACED