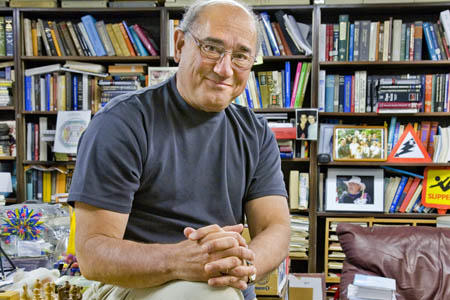 Pines is a pioneer in the development and applications of nuclear magnetic resonance (NMR) spectroscopy.  In his early work, he demonstrated time-reversal of dipole-dipole couplings in many-body spin systems, and introduced cross-polarization high resolution NMR of dilute spins such as carbon-13 in solids, thereby helping to launch the era of modern solid-state NMR in chemistry. He also developed the areas of multiple-quantum spectroscopy, adiabatic sech/tanh inversion pulses, zero-field NMR, double rotation and dynamic-angle spinning for quadrupolar nuclei, iterative maps for pulse sequences and quantum control, and the quantum geometric phase. His combination of optical pumping and cross-polarization made it possible to observe enhanced NMR of surfaces and the selective "lighting up" of solution NMR and magnetic resonance imaging (MRI).

His current program is composed of two complementary components. The first is the establishment of new concepts and techniques in NMR and MRI, in order to extend their applicability and enhance their capability to investigate molecular structure, organization and function from nanometers to meters in systems ranging from materials to organisms. Examples of methodologies emanating from these efforts include: novel spin polarization and detection methods, ex situ and mobile NMR and MRI, laser-polarized NMR and MRI, functionalized NMR biosensors and molecular imaging, ultralow and zero-field SQUID NMR and MRI, remote detection of NMR and MRI amplified by means of laser magnetometers, and miniaturization including microfluidic chemistry and “NMR/MRI on a chip”. The second component of his research program involves the application of such novel methods to problems in chemistry, materials science, and biomedicine.

Alexander Pines is the Glenn T. Seaborg Professor of Chemistry at the University of California, Berkeley, Senior Scientist in the Materials Sciences Division of the Lawrence Berkeley National Laboratory (LBNL), and a Faculty Affiliate at QB3-the California Institute of Quantitative Biomedical Research.  He was born in 1945, grew up in Rhodesia (now Zimbabwe) and studied undergraduate mathematics and chemistry in Israel.  Coming to the United States in 1968, Pines obtained his Ph.D. in chemical physics at M.I.T. in 1972  and joined the Berkeley faculty later that year.