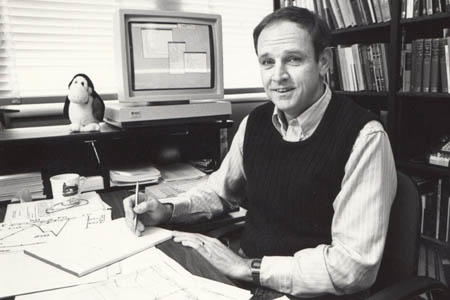 Theoretical Chemistry Chemical Dynamics
Quantum mechanical and semiclassical theories are being developed and used to describe dynamical chemical processes at the molecular level.

Professor Miller's research deals with essentially all aspects of chemical dynamics, especially the theory of chemical reactions and reaction rates, as well as other dynamical phenomena such as photodissociation, femtosecond pump-probe spectroscopy, etc. The goal is to be able to describe these dynamical processes at the same level of molecular detail as one can the static/structural properties of molecules. Effort is focused on developing new theoretical methods and models, and also on the application of these approaches to specific problems of chemical interest.

For small (3 or 4 atom) molecular systems it is possible to carry out essentially exact quantum mechanical scattering calculations, and indeed a great deal of success has been achieved in recent years in calculating state-to-state reactive scattering cross sections. This provides the most complete characterization of a chemical reaction allowed by the basic laws of nature. Even more exciting, however, has been the development of ways to calculate more averaged properties of a chemical reaction, e.g., its thermally averaged rate constant, "directly" i.e., without inherent approximation. This is not only an interesting intellectual development, but it provides improved ways to carry out practical calculations of rate constants for chemical reactions.

To treat more complex molecular systems Prof. Miller's group is pursuing use of the semiclassical (SC) initial value representation (IVR) as an approximate way to include quantum effects into classical molecular dynamics (CMD) simulations. CMD can be applied nowadays to a wide variety of complex molecular phenomena - chemical reactions in liquids, in clusters, in biomolecular environments, on surfaces - but it is based totally on classical mechanics to describe the motion of the nuclei. (Electrons, of course, are treated quantum mechanically and produce the effective potential function that governs nuclear motion.) Semiclassical theory is capable of describing all types of quantum effects - interference/coherence, tunneling, vibrational zero point energy, effects of identical particle symmetry - and the IVR is potentially a practical way of implementing SC theory for truly complex molecular systems. A variety of new advances have recently been made that significantly enhance the practicality of the SC-IVR approach, and calculations have been carried out for a number of chemical problems that demonstrate its wide applicability; these include vibrational tunneling splitting in van der Waals complexes, photodissociation of ozone, femtosecond photodetachment of I2-, molecular energy transfer, proton transfer in 7-azaindole dimers, electronically non-adiabatic processes, and flux correlation functions for chemical reactions.