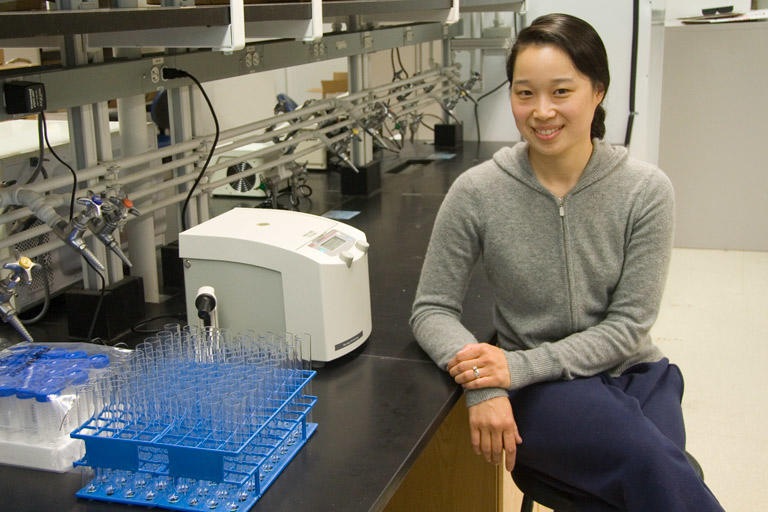 Our research laboratory utilizes the approaches of mechanistic biochemistry, molecular and cell biology, metabolic engineering, and synthetic biology to address problems in energy and human health. We design and create new biosynthetic pathways in microbial hosts for in vivo production of biofuels from abundant crop feedstocks and pharmaceuticals from natural products or natural product scaffolds. A unifying theme of all of our projects is a focus on gaining a detailed molecular understanding of how living cells control enzymatic processes within the context of the entire metabolic network. Specific projects under current investigation include (i) the in vivo production of biofuels from plant biomass, and (ii) the development of new biosynthetic methods for selective, catalytic C-F bond formation under mild conditions.

Sustainable energy is a significant challenge facing our planet and securing carbon-neutral sources of energy is essential to meeting growing energy demands while addressing environmental concerns. Energy and fuels produced from plant biomass offer an important renewable solution to this problem and also allow reduction in the overall release of greenhouse gases. We are constructing new biosynthetic pathways in bacterial hosts that can convert plant biomass into fuel molecules. Using synthetic biology methods, we can draw enzymes from a variety of different environmental organisms and combine them in a single genetically-engineered host. This mix-and-match approach allows us to create and tailor new biological tools for multi-step, multi-enzyme chemical synthesis.

Natural products and their scaffolds continue to provide a rich source for the discovery and development of new therapeutics to treat human conditions ranging from cancer to neurodegeneration to microbial infections. In this regard, halogenated natural products (vancomycin and chloramphenicol) as well as synthetic drugs (Prozac, Lipitor, Cipro) encompass a growing class of important organohalogen-based pharmaceuticals. Organofluorine compounds are of particular interest as the introduction of C-F bonds can tune drug activity and specificity as well as in vivo metabolism of drugs. However, one of the major limitations in drug development is ability to selectively form C-F bonds as the available chemical methods for fluorination are difficult and typically carried out with harsh reagents without sufficient control over regio- or stereospecificity. We are developing new biocatalysts for selective and efficient C-F bond formation under mild conditions through the isolation, characterization, and mechanistic investigation of new enzymes involved in biological halogenations. These designer enzymes will have broad impact as synthetic tools for drug discovery and development.