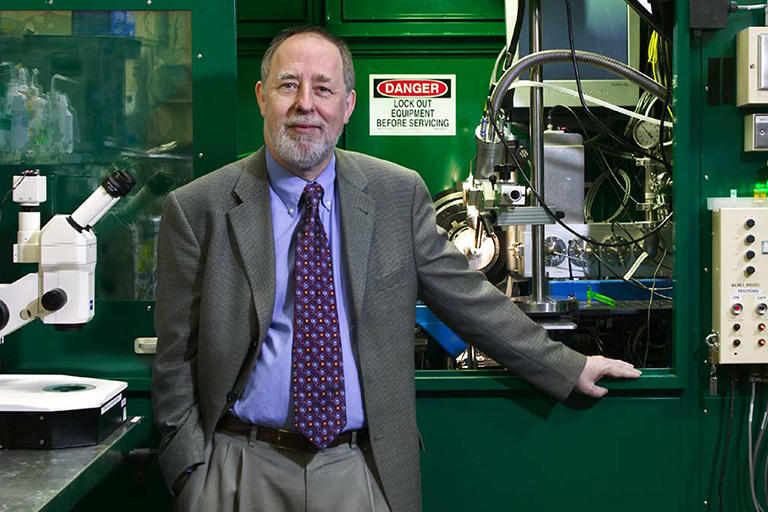 Chemical and Biological Dynamics in the Condensed Phase — Ultrafast Spectroscopy combined with theory and simulation is used to investigate many-body dynamics in liquids, solutions, glasses, and proteins, especially photosynthetic proteins

In natural photosynthetic systems we aim to define the design principles underlying their remarkable .quantum efficiencies, and to use these principles to aid in the design of robust and efficient artificial photosynthetic devices. Natural systems are also regulated in response to external conditions, such as light levels, and one of the key components of Photosystem II is regularly repaired. We plan to understand the control system at the molecular level by combining molecular genetics biochemistry, modeling, and ultrafast spectroscopy through collaboration with Professor K. K. Niyogi. We have recently shown, using two-dimensional electronic spectroscopy, that long lived electronic quantum coherence exists in photosynthetic light harvesting complexes. We are exploring the implications of quantum coherence for photosynthesis and for quantum information science.

The electronic properties and excited state dynamics of nanoscale materials with significant quantum confinement effects yield a rich range of properties and potential applications. We aim to understand these properties with a particular current emphasis on single-walled carbon nanotubes via non-linear ultrafast spectroscopy and theoretical modeling.

The modern theoretical description of photochemical processes, in particular what determines which products are formed, has at its core relaxation through conical intersections. Yet very little experimental information is available on such processes. Two dimensional electronic spectroscopy has the potential to provide a window into these processes and experiments to explore conical intersection dynamics are under development.

Ultrafast multidimensional electronic spectroscopy is in its infancy with many potential ways to enhance resolution, sharpen the information content and extract specific dynamical pathways (e.g., those that involve only coherence). My group continues to develop new spectroscopic methods and the theoretical tools for their analysis.

Graham Fleming was appointed Vice Chancellor for Research at the University of California in 2009. Through high level positions at UC Berkeley and Lawrence Berkeley National Laboratory (where he was Deputy Laboratory Director from 2004 - 2006), he has been involved in the formation and operation of multiple major initiatives at Berkeley and LBNL. These include the $500M BP funded Energy Biosciences Institute, The California Institute for Quantitative Bioscience and the Simons Institute for the Theory of Computing.

Throughout his administrative career, Fleming has remained a highly active and successful scientific researcher. He has authored or co-authored more than 444 publications, and is widely considered to be one of the world's foremost authorities on ultrafast processes. His ultimate goal is to develop artificial photosynthesis that would provide humanity with clean, efficient and sustainable energy. He is a member of the National Academy of Sciences, and the American Philosophical Society and a Fellow of the Royal Society, the American Academy of Arts and Sciences and a Foreign Fellow of the Indian National Science Academy.