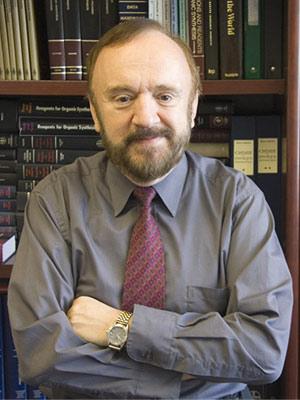 Organic, polymer, materials and medicinal chemistry — Organic chemistry on the nanometer scale with macromolecules: from catalysis and chiral recognition to targeted drug delivery

Most individual projects in the Frchet research group involve organic synthesis applied to large macromolecules for which chemical structure, architecture, and reactive group placement defines function. Our research covers both fundamental and applied aspects of organic, polymer, and materials chemistry. As a result, most projects involve three stages:

I. Control of molecular architecture at the nanometer scale.
While most common organic molecules - "small molecules"  - have sizes well below one nanometer, macromolecules such as proteins or synthetic polymers have sizes in the nanometer range. Within this size range, it is generally very difficult to control the 3-D structure of the molecules.  Nature has learned how to achieve this with proteins and DNA but most other large synthetic macromolecules have little shape persistence and precise functional group placement is difficult. During the past decade dendrimers and other dendritic macromolecules have emerged as a major new family of well defined nanoscale building blocks.  They are globular, and sometimes almost spherical in shape, and the placement of their functional groups within the molecules can be accurately controlled.  Our synthetic work seeks new ways to prepare these molecules and to incorporate catalytic or other active sites.  In some cases we organize these reactive sites to achieve cooperative effects, while in other cases we seek to "insulate" these sites from each other, or restrict their access by external moieties, affording novel properties.   A great variety of molecular frameworks may be used and new, creative ways to assemble large and precise macromolecules are being designed and explored.

II. New polymerization mechanisms: hyperbranched polymers and hybrid copolymers.
Though less precisely defined than dendrimers in terms of structure, several other families of synthetic macromolecules derive their function from a combination of shape and chemical reactivity.  We explore novel approaches for the preparation of such macromolecules.  Instead of a step-by-step approach, we seek new reaction mechanisms that provide both structural and functional control in a single step.

III. Separation, molecular recognition, and reactive surfaces.
In order to exploit the power of functional surfaces in binding, recognition, and catalytic processes, we develop porous organic materials that present reactive functionalities over large contact  areas.  These materials, which generally take the form of polymer beads or macroporous monoliths, may carry a broad array of functionalities, enabling them to carry out functions such as biocatalysis, separation, or chiral recognition.  Their uses in areas such as solid-phase syntheses, combinatorial chemistry, or miniaturized "lab-on-a-chip" are also explored.

IV. Functional macromolecules and their applications.
Much of our research is mission oriented and many of the functional macromolecules we prepare are designed for a specific application. For example, a dendrimer with laser dyes placed at its periphery can act as a light-harvesting antenna; the same molecule fitted with a catalytic site might perform photosynthesis.  A macromolecule may be designed to act as a vector or carrier for a drug specifically "engineered"  to avoid side effects, and capable of precise delivery of its "payload"  with the help of targeting and release functionalities. A reactive polymer may be used for the sort of precision imaging that is required in the preparation of today's powerful microprocessors or optoelectronic devices. A macroporous polymer bead with pendant chiral groups may be perfectly suited for the analysis, recognition, or enantioseparation of biologically active molecules.