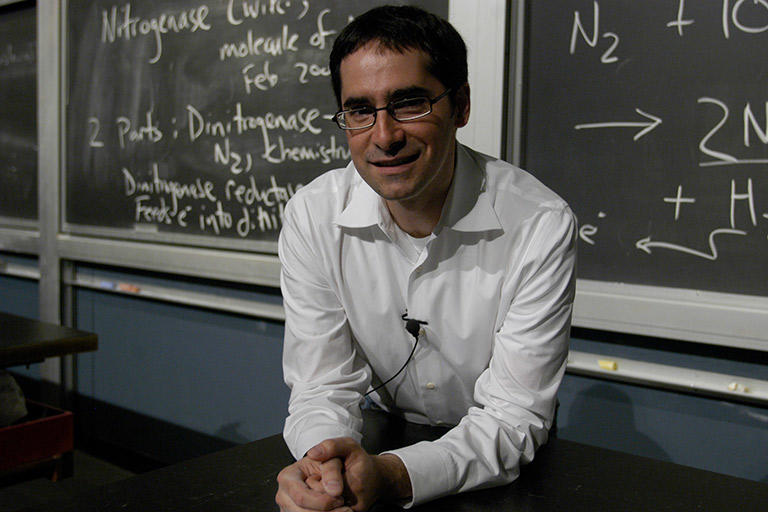 Molecular Basis for Protein Synthesis by the Ribosome

Protein synthesis is the universal mechanism for translating the genetic code into cellular function. The machine that carries out translation is the ribosome, a large RNA-protein complex whose structure is highly conserved in all kingdoms of life. Ribosomes, which are over 21 nm in diameter, interact with several different ligands and cofactors, including messenger RNA (mRNA), transfer RNA (tRNA), and proteins involved in the initiation, elongation, and termination of protein synthesis. Ribosomes are also dynamic entities; the small and large ribosomal subunits associate and dissociate during one full cycle of protein synthesis. We are exploring the process of protein synthesis by the ribosome. Key questions about the fundamental nature of translation remain unanswered. For example, how does the ribosome accurately move along an mRNA? In humans, how is translation regulated, and how do viruses circumvent these controls? And how do certain antibiotics, so useful in reducing infections, cripple ribosomes?

We are using cryo-electron microscopy, systems biology, biochemistry, and biophysics to unravel the mechanism of protein synthesis, in humans and in bacteria. For example, we are probing the mechanisms by which translation initiation factors in humans regulate the levels of protein synthesis on specific mRNAs. In addition we are studying how human pathogens such as the hepatitis C virus (HCV) avoids host defenses and hijacks the human ribosome to translate its own proteins. We are also looking at the structure of the bacterial ribosome both in the absence and presence of antibiotics to decipher their effects on protein synthesis.

Translation initiation in humans. In eukaryotes, translation is initiated by a complex mechanism in which the 40S ribosomal subunit is recruited to the mRNA 5’-end cap structure, recognizes the start codon by a scanning mechanism before association with the 60S ribosomal subunit to form an active 80S ribosome. In an alternative pathway used by viruses such as the human pathogenic hepatitis C virus (HCV), an RNA structure called an internal ribosomal entry site (IRES) located in the 5’ untranslated region recruits, properly positions, and activates the ribosome in a cap- and end-independent process.  Initiation from the HCV IRES involves only a small subset of the eukaryotic initiation factors (eIFs) needed for canonical translation initiation.  We are studying aspects of both pathways of initiation using a variety of systems biological, biochemical and structural approaches to provide a better understanding at the molecular level how these processes work.

CryoEM and X-ray crystal structures of the E. coli ribosome. We are using cryo-electron microscopy (cryoEM) and x-ray crystallography to probe the structural basis for the many aspects of protein biosynthesis that require the intact ribosome. Our goal is to make an atomic-resolution "movie" of a ribosome in the process of making a protein. Crystals of the intact ribosome also provide an unprecedented opportunity to probe in atomic detail the effects of antibiotics on the full ribosome and mutations in the ribosome that lead to antibiotic resistance or perturb key steps in translation. While we have used X-ray crystallography to take atomic-resolution "snapshots" that served as frames in a movie of the ribosome in action, recent advances in cryoEM now make it possible to determine atomic-resolution structures of the intact ribosome. We are working with Bob Glaeser's group to develop new methods to increase the resolution that can be achieved by cryoEM, to determine new structures of the ribosome in functional states that have not been possible to crystallize. 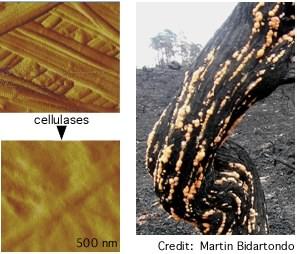 Liquid fuels produced from perennial plants have the potential to reduce our dependence on oil. However, the current process for converting biomass to liquid fuels is too expensive for them to be cost competitive with conventional gasoline or diesel fuels.  We are studying the biological degradation and utilization of cellulose by fungi. We believe a more complete understanding of how microbes consume the plant cell wall, including cellulose and hemicellulose, will help to reduce the cost of lignocellulosic biofuels.

As part of the Energy Biosciences Institute, we are studying the degradation of the plant cell wall by the filamentous fungus Neurospora crassa.  Neurospora crassa is widely recognized as a model organism and has comprehensive genetic, biochemical, and functional genomic tools.  Building on a system wide analysis of Neurospora's response to growth on cellulosic biomass (Tian and Beeson et al., PNAS, 2009), we have discovered numerous pathways used by fungi to consume the plant cell wall. We are using systems and synthetic biology to integrate these pathways into the premier biofuel producing organism, the yeast Saccharomyces cerevisiae, to improve biofuel production from plant biomass.