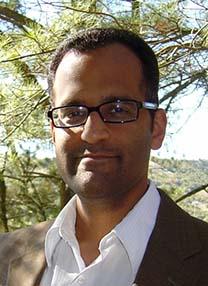 My research team and I seek to understand, control, and exploit communication between cells and their material surroundings. In addition to investigating fundamental aspects of how cells interact with natural and engineered materials, we are especially interested in understanding the role played by cell-biomaterial signaling in cancer and stem cell biology. An important recent direction for our work has been to synthesize or fabricate new tissue-mimetic culture platforms for biological discovery, molecular screening, and therapeutics in brain cancer, neurodegenerative diseases, and obsesity-related diseases. Finally, we are very interested in developing new materials inspired by cellular structural networks that may have broader applications in biotechnology and soft materials science.

Sanjay Kumar earned a B.S. in Chemical Engineering (1996) from the University of Minnesota, and both an M.D. (2003) and Ph.D. in Molecular Biophysics (2003) from Johns Hopkins University as a Fellow of the NIH Medical Scientist Training Program. From 2003-2005, he served as an NIH Research Fellow at Children's Hospital Boston and Harvard Medical School. He was appointed Assistant Professor of Bioengineering at UC Berkeley in 2005, eventually promoted to Full Professor in 2014, and named Chair of Bioengineering in 2019. He is also a Faculty Scientist in the Biological Systems & Engineering Division of Lawrence Berkeley National Laboratory. Dr. Kumar and his research group have been fortunate to receive a number of honors, including the Presidential Early Career Award for Scientists and Engineers (PECASE), The NIH Director's New Innovator Award, The Arnold and Mabel Beckman Young Investigator Award, the NSF CAREER Award, and the Stem Cells Young Investigator Award. He is an elected Fellow of AIMBE and BMES.