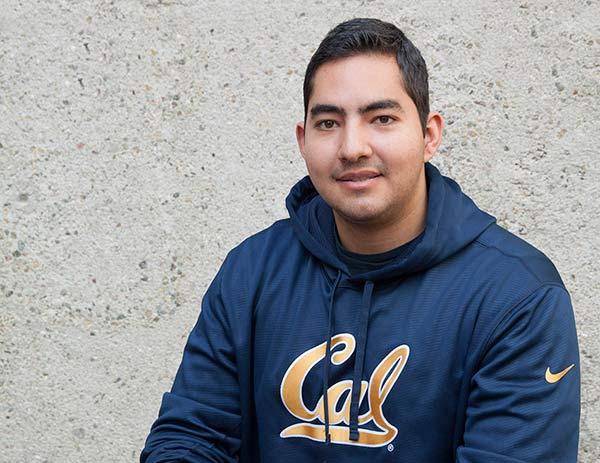 Steven Chavez, a talented and hard-working CBE undergraduate, will be starting a Ph.D. program in the Department of Chemical Engineering at the University of Michigan next fall. For the first time in his college career, Chavez won’t have to work to pay for his education.

Thanks to graduate fellowship support from the Ford Foundation and the National Science Foundation, as well as a departmental merit fellowship, his finances will be completely covered.

Chavez’s early life was tough, and finding time to study wasn’t easy. His mother, a single parent, struggled to support him and his younger sister. “When I’d get up in the morning for school, my mother would be gone,” he says. “When I got home from school, she would still be at work.

“When she was working overtime or on weekends, which happened a lot, I would go to bed without seeing her,” adds Chavez. “I have basically taken care of my sister and myself since I was about 10 years old.”

In high school Chavez tutored other students to help make ends meet. Despite being part of AVID, a non-profit college prep organization that supports motivated students, he did not really know what college entailed. “I always performed well on exams,” he says, “but I was working too much to get great grades. I saw kids going off to big-name colleges who I knew weren’t any smarter than me.”

Chavez spent his first two years of college at UC Riverside and worked two jobs to fund his education and to help his mother financially. In 2012 he was one of the very few intercampus transfer students accepted by the College of Chemistry.

At Berkeley, he has continued to tutor and take on other jobs to finance his education. “It has been rough. I’ve worked about 20-25 hours a week almost every semester here at Berkeley, sometimes more. It gets stressful when you add in the full course load,” he says.

Even so, Chavez did manage to find time to do research. He was one of the first undergraduate students to work at LBNL’s Joint Center for Artificial Photosynthesis and he spent the summer of 2014 at MIT doing catalysis research.

Says CBE’s acting director of undergrad education Shannon Ciston, “Steven made an impression on me right away.  He is remarkably self-motivated and tenacious in the face of challenges and has a high level of commitment to learning. I look forward to seeing him grow during his career, and I will always be proud to have known him as an undergraduate student.”

Chavez adds, “I’m grateful for the support and acknowledgement of the Ford Foundation and NSF, and all the other folks who have helped me along the way. Special thanks to my mother, Teresa, for being the hardest-working person I know, my mentors from both Berkeley and Riverside, and all my friends. I couldn’t have done it without their support.”

Chavez plans to join the research group of Suljo Linic at the University of Michigan in the fall, where he will work on plasmon-enhanced catalysis.

When scientists fight to save the climate
END_OF_DOCUMENT_TOKEN_TO_BE_REPLACED