We have learned of the deaths of the following members of the College of Chemistry community. Listed below are their names, UC Berkeley degree information, and information about their academic and work history if known. We have also provided a link to an online obituary, when available. 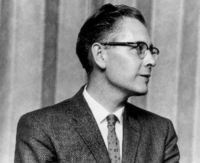 Dr. Dodgen grew up in Long Beach, Calif. He moved to Berkeley to attend the University of California, where he received a B.S. in chemistry and a Ph.D. in physical chemistry in 1946. During World War II while in Berkeley, he worked on the Manhattan Project, which developed the first atomic bomb. He was the first person to determine the spectrum of plutonium, which was a necessity to the success of the project. From 1946 to 1948 he did post-doctoral work at the Institute for Nuclear Studies in Chicago, Ill., and then moved to Pullman to join the faculty of the chemistry department at Washington State University (then WSC). In 1954 he became head of the Reactor Project, which lead to the building of the Nuclear Science Center that now bears his name. In 1968 he joined with Dr. William Band to create the Chemical Physics Program at WSU. Harold retired from WSU in 1986. [1] 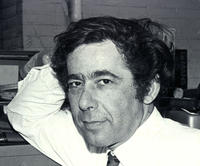 Dr. Klemperer was an American chemist who was one of the most influential chemical physicists and molecular spectroscopists in the second half of the 20th century. Klemperer is most widely known for introducing molecular beam methods into chemical physics research, greatly increasing the understanding of nonbonding interactions between atoms and molecules through development of the microwave spectroscopy of van der Waals molecules formed in supersonic expansions, pioneering astrochemistry, including developing the first gas phase chemical models of cold molecular clouds that predicted an abundance of the molecular HCO+ molecular ion that was later confirmed by radio astronomy.  After one semester as an instructor at Berkeley, Bill returned to Harvard in July, 1954. Klemperer's initial appointment was as an instructor of analytical chemistry, but he quickly rose through the ranks and was appointed full professor in 1965. He remained associated with Harvard Chemistry throughout his career. He spent 1968-69 on sabbatical with the Astronomers at Cambridge University and 1979-81 as Assistant Director for Mathematical and Physical Sciences at the U.S. National Science Foundation. He was a visiting scientist at Bell Laboratories during a time when it was the premier industrial laboratory. Klemperer became an emeritus professor in 2002 but remained active in both research and teaching. [1] 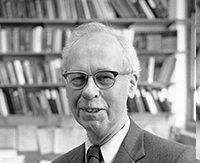 Donald McClure was the Russell Wellman Moore Professor of Chemistry, Emeritus, at Princeton University. McClure joined Princeton’s faculty in 1967 and transferred to emeritus status in 1991. He made pioneering contributions to the fields of molecular spectroscopy and condensed-matter physics. McClure published more than 130 papers in chemistry and physics journals, the book, “Electronic Spectra of Molecules and Ions in Crystals,” and chapters of several other books. He studied the phosphorescence of organic molecules, the electronic levels of key organic molecules of the heterocyclic class, and photochemical processes. He also focused on the spectra of inorganic ions in ionic crystals and multiphoton spectroscopy using lasers. His work in spectroscopy led to deep understanding of such things as the origin of the remarkable colors of gem stones and related crystals. In an era before the invention of lasers, he showed great insight and ingenuity in devising ways to measure the life times of excited electronic states of organic molecules. Today, the bright OLED (organic light-emitting diode) screens on cellphones derive from discoveries Don made on how these electronic excited states generate phosphorescence.

Harrison Albert ('59, B.S, Chem)  Dr. Albert received his Ph.D. in Physical Chemistry from the University of Colorado, Boulder in 1969. After graduate school, he worked at the IBM Watson Research Center then returned to Boulder to join the University of Colorado faculty, teaching Analytical Chemistry. He then went to work at Ball Aerospace, in the celestial navigation group building star trackers, which are navigation instruments for the space shuttle. He has also done work for NBS/NIST on computer peripherals, power supplies, and the atomic clock.

Evan H. Appelman ('60, Ph.D., Chem) After graduating with an AB in chemistry in 1953 and a master's degree two years later, Dr. Appelman was awarded a National Science Foundation graduate fellowship and earned a PhD in chemistry from the University of California at Berkeley. In 1960, he began work at Argonne. Dr. Appelman retired from Argonne as a senior chemist in 1995. He was a leading expert on fluorine and astatine (he wrote the World Book entries for the two elements) and was widely published in scientific journals.

Fred F. Coons ('52, B.S. ChemE)  Mr. Coons studied Chemical Engineering at U.C. Berkeley, graduating with a BS degree in 1944. He started his employment with Spreckels Sugar Company that same year. During his 44 years with Spreckels and then Amstar, he progressed from Research Chemist to Chief Engineer to Vice President of Operations to President at Spreckels. He earned an MBA from Golden Gate University in 1983. He ended his career as Executive Vice President of Amstar.

Donald B. Denney ('52, Ph.D. Chem) After Dr. Denney received his PhD in Chemistry from the University of California at Berkeley, he did a one-year post doc at Yale University before joining the faculty of Chemistry at Rutgers University. He was a Professor of Chemistry for 40 years at Rutgers before retiring.

Herbert Di Grazia ('52, B.S. Chem) Di Grazia was a WWII veteran and UC Berkeley alumnus. He worked in the atomic Seaborg research group and retired from the Lawrence Berkeley and Livermore Labs after 37 years.

Victor Gunther ('42, B.S. Chem) Gunther was an officer in the US Navy during WWII. He served as a radio operator in the Pacific. After the war, he was employed by the Shell Oil Company. He spent the last twenty years of his career as the Manager of Economics and Scheduling at the Martinez Refinery Complex. Altogether, he worked for Shell for forty years retiring in 1986. He was a loyal supporter of Cal and the College of Chemistry.

Phillip F. Hirsch ('50, B.S. Chem) He attended the University of California at Berkeley, graduating with a degree in Chemistry. After he was awarded a Ph.D. in Physiology, Dr. Hirsch became an Associate Professor at Harvard University. Dr. Hirsch worked at the Lawrence Livermore Radiation Laboratory before going to UNC-Chapel Hill in 1966 as a Professor of Pharmacology. In 1975 he became the Director of the Dental Research Center in the UNC School of Dentistry, a position he held until 1983. In 1992 he retired and was named Professor Emeritus of Pharmacology and Dental Ecology.

Richard L. Nolder ('51, B.S. Chem, '64, Ph.D. Material Science)  Worked as a scientist in the aerospace industry until he retired in 1993. He was an avid student and enjoyed study and research throughout his life. He was a veteran of WWII having served in the US Navy until June 1945.

Llad Phillips ('56, B.S. Chem)  After obtaining a degree in nuclear chemistry from UC Berkeley, Llad joined Glenn Seaborg’s lab at UC Berkeley's Radiation Laboratory, where he worked on the discovery of radioactive isotopes. He obtained his Doctorate in Economics from Harvard University in 1969. He spent his entire academic career in the Economics Department at the University of California, Santa Barbara.

Glen A. Short ('53, B.S., Chem)  After service in the United States Air Force, he attended the University of California Berkeley and obtained his BS in Chemistry. In 1954 he moved to Salt Lake City Utah where Glen started work on his PHD in Chemistry. He returned to California where he began his long career with Shell Chemical Co. He specialized in plastics research in Emeryville.

George A. Sturdevant ('62, B.S. Chem)  After receiving his undergraudate degree at Cal, he did his post graduate work in Chemical Engineering at Rice University in Houston, Texas and earned a PhD. After graduation from Rice he worked for Standard Oil Company and the Ralph M. Parsons Engineering Company.